Dust-proof, Rain-Proof and Drop-Proof up to 1.2m
Designed for Heavy-Duty Use — Ideal for Non-Destructive Testing
in Harsh Environments
Another World First from Olympus! 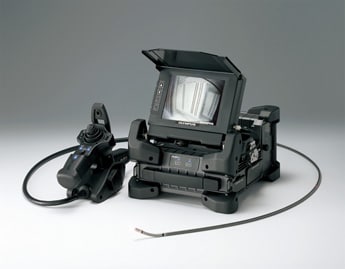 On July 4, Olympus Corporation (Olympus, President: Tsuyoshi Kikukawa) will implement the simultaneous worldwide launch of its new industrial videoscope, the IPLEX FX. This new product is the first battery operated system of its type in the world*1 to be fully dust-proof, rain-proof and drop-proof up to 1.2m. The IPLEX FX is the latest product in the IPLEX Series, which was first launched in 2001. While providing the equivalent features as the most advanced model in the series, the IPLEX FX has about one-eighth of the volume and 30% of the weight. The result of this drastic streamlining is a highly mobile system that is the same size as a small computer bag. It also features a scope with an external diameter of just 4.0mm for an increased range of inspection uses.

Olympus first entered the industrial endoscope market in 1968. We subsequently introduced an industrial videoscope in 1986, and the IPLEX all-in-one industrial videoscope in 2001. By continually enhancing our imaging and precision engineering technology, we have made an important contribution to non-destructive testing for both maintenance and R&D purposes. Industrial endoscopes are used for internal inspections in situations ranging from industrial plants, aircraft engines and power turbines, to automotive parts and plumbing systems in buildings. In addition to superb image quality and sophisticated features, users need endoscopes that are flexible, portable and tough enough to withstand heavy-duty use and harsh conditions in the field.

The IPLEX FX was developed to combine the performance and features of the IPLEX SA II R Series, the top model in the IPLEX Series, with the compactness of the IPLEX MX while also providing a new feature-toughness. The result is the world's first industrial endoscope system to pass a 1.2m drop test. With a totally dust-proof and rain-proof sealed body, the IPLEX FX is a departure from the image of fragility traditionally associated with precision equipment. Olympus has dramatically expanded the range of uses for industrial videoscopes.