- Nature and Wildlife You Want to Protect -

Olympus Corporation (President: Tsuyoshi Kikukawa) is pleased to announce an international photo contest to be held in conjunction with Global Warming Witness – Mitsuaki Iwago Special ("GWW"), an Olympus online exhibition at http://www.olympus.co.jp/en/gww. Any amateur photographer in any country is eligible to enter this contest, which is accepting entries from July 1, 2008 to November 30, 2008. The panel of judges will be headed by wildlife photographer Mitsuaki Iwago and will include newscaster Crystel Takigawa as guest judge.

Olympus' GWW continually showcases photos and images of this planet as captured by wildlife photographer Mitsuaki Iwago from his distinct perspectives, in a bid to make more people aware of the critical state of global warming and help them understand the consequences.

The theme of the GWW Photo Contest is "Nature and Wildlife You Want to Protect." Examples of entries we welcome include: images of beautiful mountains and seas in the countryside, precious animals and plants closer to home, animals and plants endangered by environmental changes, sea creatures and coral showing signs of bleaching, and glaciers and ice floes. These are just some examples of scenes that a contestant may encounter during a trip, and that give a glimpse into the current state of nature and the planet as captured through the unique eyes of contestants.

Amateur photographers in any country, regardless of age, gender or location, are eligible to enter the contest.

Entries are accepted from July 1, 2008 to November 30, 2008. Award winners will be notified in January 2009. The winner of the Mitsuaki Iwago Prize will be presented with an E-3 digital SLR camera with an interchangeable lens. The winning works and other entries will later be put online on the GWW site.

Wildlife photographer Mitsuaki Iwago has captured many images of wild animals living in their natural, undisturbed setting in every corner of the globe. GWW showcases various consequences of global warming that are threatening many animals through images taken by Iwago from his unique perspective. The photo contest welcomes entries that capture the state of the earth from diverse angles, and particularly changes taking place closer to home and all living things large and small in the environment where we live – images that make us more aware of the importance of nature and living creatures in our surroundings and the consequences of changes.

The first in the series of expeditions took Iwago and his crew to Wegner Bay in arctic Canada to witness the impact of global warming through the disappearing sea ice and polar bears in 2006. On the second expedition in 2007, they visited Africa's Mount Kilimanjaro to capture views of the melting glaciers on top of the mountain and the lives of wild animals at the foot of the mountain. Armed with experience in the Arctic and the tropics where the impact of global warming is clear, the team headed for Shiretoko in Japan. Some images from Shiretoko are available for preview from June 2, 2008. The site for the Shiretoko expedition is formally scheduled to be opened in October 2008. 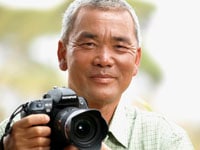 Born in 1950 in Tokyo, Iwago was overwhelmed by the natural wonders of the Galapagos at age 19 and this experience inspired him to pursue a career in wildlife photography. Since then, his field of photographic activity has extended to every continent on the planet. His distinct use of colors and contrast is highly acclaimed by the overseas media, calling them "Iwago's Colors." His works have been featured on the cover of the National Geographic magazine twice. His Serengeti: Natural Order on the African Plain, a book of photos he took while living in Africa's Serengeti National Park, has been a long-seller and was translated into English. In recent years, he has taken many images of nature and wildlife around the world, including polar bears in arctic Canada and giant pandas and crested ibis in China using Olympus' digital SLR camera. His images warn the world of rapid changes in the environment and their impacts. Some of his works can be seen at www.digitaliwago.com