Olympus Imaging Corporation (President: Masaharu Okubo) is developing a new interchangeable-lens digital SLR (single lens reflex) within the Olympus E-System. This new Four Thirds-compliant camera reinforces the company's commitment to the standard.
Positioned as a mid-level model, this new interchangeable-lens digital SLR camera is intended for anyone who wants to express their creativity through photography, whether they are an amateur just starting out or a profession with years of experience behind them. Introduction of the new camera is expected in the first quarter of the year 2009.
The developed camera will be exhibited as a reference product at Photokina 2008, the world's biggest trade fair for the photographic and imaging industries held at the Cologne Trade Fair in Cologne, Germany, on 23 to 28 September in this autumn.

At the last Photokina in the autumn of 2006, Olympus declared in 2007, the second chapter in the story of the Olympus E-System would begin. One of the highlights of this chapter was the incorporation of "Full-Time Live View" function as a standard function for the first time in the industry, adding to the excitement already generated by other distinctive features of the E-System such as the "100% Digital-Dedicated Design" and "Dust Reduction System." At present, the E-System camera lineup includes popular models such as the E-420 and E-520, as well as the flagship E-3. All of these cameras provide digital SLR camera users with the high picture quality, superior reliability and exceptional portability they need.

The camera announced today is being developed as an advanced amateur model that will be positioned between the E-520 and E-3. In terms of quality and performance, however, there is nothing mid-level about this model. It will inherit all the outstanding features of the E-3 such as the high-speed AF system using 11-points-full twin cross sensor and the built-in image stabilization mechanism with a correction effect of max. 5 EV steps*1. Other features include a new and updated feature to replace the current splash- and dust-proof function. Olympus hopes to release this new camera in the first quarter of the year 2009.

With the introduction of this new camera, Olympus will expand its line of Four Thirds System-compliant digital SLR cameras, providing a wider range of choices to a wider range of users from serious amateurs to professionals. 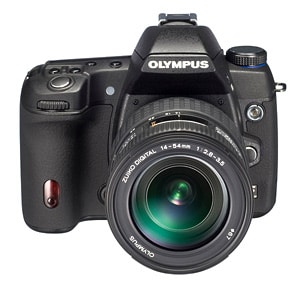