Olympus Space Project, as company's ninety years anniversary project
Images of the Earth taken from Space with the E-3 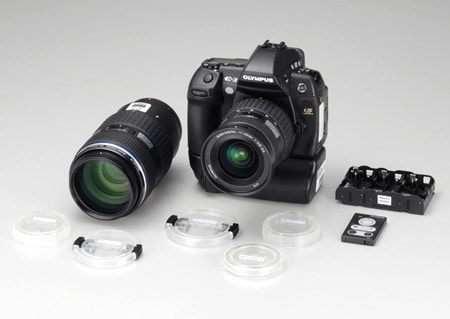 Equipment of the Olympus Space Project

Olympus Corporation announces today the "Olympus Space Project" as its ninety-year anniversary project. Dr. Koichi Wakata, the astronaut of JAXA will use the Olympus E-3 Digital SLR camera and ZUIKO DIGITAL lenses to photograph the Earth from the "Kibo", the Japanese experimental module within the ISS (International Space Station). The photographs will be posted on Olympus' web sites and shown at photo exhibitions. The wonderful images of Earth taken from space will make people recognize the importance of our environment. The next launch of the Space Shuttle Discovery will carry Dr. Wakata and his E-3 to the ISS.

In October 2009, Olympus Corporation will celebrate its ninety-year anniversary. The company initially specialized in microscopes and has continued to develop innovative technologies in imaging, medical and life sciences -- with incredible optics being the common thread. Improving peoples' lives has been the cornerstone of Olympus' history.

Today, companies are focusing on the environment. Olympus has communicated the importance of our environment through images that demonstrate the effects of global warming on the earth and wildlife. One example is the contents of the "Global Warming Witness - Mitsuaki Iwago" posted on Olympus' website. The "Olympus Space Project" will show earth's irreplaceable beauty through breathtaking images captured from the space station.

The "Kibo" is the Japanese experiment module within the ISS, which was built and operated by a consortium of 15 countries. The "Kibo" is the first Japanese module designed for the astronauts to stay. The JAXA astronaut Dr. Koichi Wakata will be the first Japanese astronaut to stay in space for a considerably long time starting in February 2009. While in the Kibo, he will take images of earth with the Olympus E-3 and ZUIKO DIGITAL lenses. The Exposed Facility will be constructed on the module during this mission and this new facility will block the Kibo's window, making the earth no longer visible from the Japanese module. This stay will be the only opportunity to photograph earth's beauty from this experiment module. This project has materialized thanks to the commercial use of the "Kibo" offered by the JAXA.

The E-3 is the flagship camera of the Olympus E-system, the digital single lens reflex camera system. Designed for professional and aspiring photographers, the E-3 provides amazing image quality and extremely durable reliability. The splash and dust proof magnesium-alloy body survives the toughest shooting environments. This mission is the optimal photographic opportunity where Dr. Wakata's E-3 will prove the absolute highest performance and highest reliability. The "made-for-extreme" E-3 complies with use in space.

Based on the Four Thirds standard, the ZUIKO DIGITAL lenses are 100 percent digital for amazing image quality. In the mission, two high-grade pro lens units will be used with the E-3 camera: ZUIKO DIGITAL 11-22mm F2.8-3.5, ED50-200mm F2.8-3.5 SWD. The lenses are manufactured at Olympus' TATSUNO plant by the most skillful master staff and offer the highest image quality. In addition to offering a wide optical range (wide angle to super telephoto), the pro lenses are also splash and dust proof for outstanding reliability in tough shooting environments.

1. The ISS (International Space Station) and the Space Shuttle
The ISS orbits approximately 400 kilometers above the Earth, at a speed of 90 minutes per orbit. It allows scientists to perform studies and experiments in space by taking advantage of special features unique to space. It was built and operated by a consortium of 15 countries - including the United States, Japan, Russia, Canada and 11 nations of the European Space Agency.

2. Japanese Experiment Module "Kibo" and JAXA Astronaut Koichi Wakata
"Kibo" will serve as a module of the ISS and is Japan's first manned facility where astronauts can conduct experiments for a long period of time. "Kibo" was transported to the ISS on three separate Space Shuttle missions since March 2008. Dr. Wakata is scheduled to stay on the ISS for approximately three months. During his stay, the Exposed facility will be docked to complete the experiment module.

In April 1992, Dr. Wakata was selected to be an astronaut candidate by the National Space Development Agency of Japan (NASDA). After Mamoru Mohri, Chiaki Mukai, Takao Doi, Dr. Wakata became the fourth Japanese astronaut and in January 1996, he flew onboard the Space Shuttle Endeavour. With the next mission, Dr. Wakata will be the first Japanese astronaut to have flown on three missions and stayed in the ISS for a long period of time.

3. Requirements of the equipment used in space
The International Space Station is in orbit around the earth. In order to secure the space environment to stay safe for a long time period, the equipment must pass the various safety revie. For example, sharp edges are not permitted and materials must omit very little volatile gas. All the equipment must pass the various inspections such as off-gas test and pressure-reduction test to get the certificate from JAXA. The E-3 and its system accessories passed all requirements.

The weight of shuttle contents are minimized. Therefore, the smaller size and reduced weight of the E-System products is beneficial. The Olympus E-System is best suited for space thanks to its light weight, small size and the high reliability.