- Nature and Wildlife You Want to Protect - 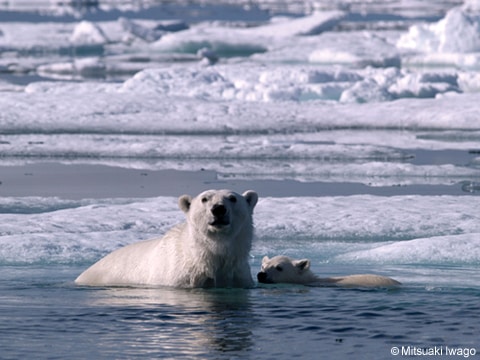 The contest, giving site users themselves the opportunity to become global warming witnesses, will take as its theme "Nature and Wildlife You Want to Protect"*1. Olympus hopes that entering the contest will give more people a feel for the changes occurring in their immediate surroundings, and the priceless nature of much we take for granted. The contest this year will be run according to an open format, with all entries received*2 to be displayed on the website.

URL: http://www.olympus.co.jp/en/gww/
The first in the series of expeditions took Iwago and his crew to Wager Bay in arctic Canada to witness the impact of global warming through the disappearing sea ice and polar bears in 2006. On the second expedition in 2007, they visited Africa's Mount Kilimanjaro to capture views of the melting glaciers on top of the mountain and the lives of wild animals at the foot of the mountain. Armed with experience in the Arctic and the tropics where the impact of global warming is clear, the team headed for Shiretoko in Japan. Shiretoko is a place where one can experience raw, untamed nature. On July 17th, 2005, the UNESCO World Heritage Committee added the Shiretoko region to the list of World Natural Heritage sites.

Over the past three years, photographer Mitsuaki Iwago has traveled to Canada, Kilimanjaro and Japan's Shiretoko region as a witness to global warming. The resulting photographs presented as a three-part GWW series have shown thousands of people the realities of global warming, and the animals living with those realities. However not all the priceless images captured by this widely-respected wildlife photographer over the past three years have yet been made available for public viewing. What sort of journey did Mitsuaki Iwago undertake on the trail of global warming? For this fourth special, images never before seen will be displayed on the site each month over a period of six months, starting on May 25 to coincide with Environment Month in June.