The European Imaging & Sound Association (EISA) is an organization representing 50 leading camera, imaging and audio magazines in 20 European countries. Each year it selects outstanding products and technologies from a wide spectrum of audiovisual product categories.

The name says it all. With its extraordinary durability and first-rate picture quality, the µ TOUGH-8010 is the ideal compact camera for anyone with an active, outdoors lifestyle. It's perfect for people who want to capture photos and HD movies in extreme conditions - or who simply tend to drop their camera once in a while. As the EISA jury pointed out, "The very robust µ TOUGH-8010 is not only waterproof, but also drop-proof and frost-proof. It is an excellent camera for using in extreme conditions. The camera suits sports people as well as families with small children and people with active lifestyles." Of course, the jury recognised that the µ TOUGH-8010 offers much more than durability. EISA also picked out the image stabilisation system that delivers sharp results in low light, the camera's 14 Megapixel resolution and the impressive 5x optical zoom. 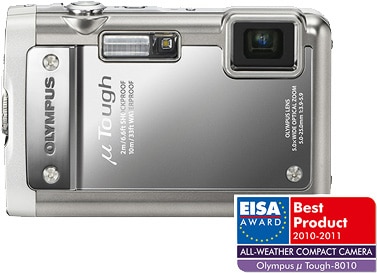 With its compact size and super wide-angle capability, the M.ZUIKO DIGITAL ED 9-18mm F4.0-5.6 lens is an outstanding add-on for Micro Four Thirds system camera owners who are keen on landscape and architecture photography. "It offers a 100° angle of view that delivers the coverage you would expect from an 18-36mm lens on a full-frame system," noted the EISA jury. "Being surprisingly lightweight and compact, it proves the exception to the rule that super-wide angle zooms have to be big and heavy." The modest dimensions of the lens match the PEN system concept that combines SLR image quality with the pocket size, simplicity and multimedia features of a compact digital camera, including High Definition movie capture. "It has an extremely fast and almost silent focusing system, which makes it an ideal lens for video recording as well," said the jury. 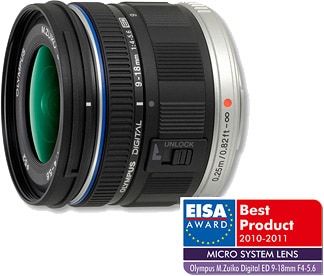