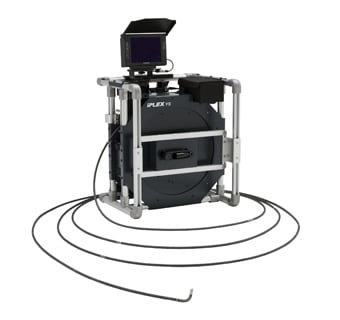 Olympus Corporation (President: Tsuyoshi Kikukawa) is pleased to announce the IPLEX YS industrial videoscope. In addition to enhanced usability made possible by advanced functions, the IPLEX YS also features an extra-long 30m insertion tube. It will go on sale worldwide on November 10, 2010.

The IPLEX Series industrial videoscopes are non-destructive inspection systems for use in a variety of maintenance situations, including aircraft engines, plant facilities, and pipes in commercial buildings and condominiums. These videoscopes can be inserted through small openings to provide inspection personnel with images that are as clear as naked-eye views, allowing them to assess situations easily and in real-time.

Equipped with an extra-long insertion tube, the IPLEX YS videoscope is the latest addition to the IPLEX Series. Drawbacks with earlier long-tube scopes include limited tip articulation, weak illumination and the inability to ascertain the orientation of the scope from the screen image. Olympus has overcome these problems by introducing advanced features, including air articulation and the world's first *1 laser illumination system.

1. Extra-long videoscope with a 30m air-articulated tube
An air articulation system allows the tip of the scope to be bent freely, despite the 30-meter length of the videoscope tube. The tip can still be manipulated for optimal observation even when the tube is only partially wound out from the built-in drum for inspections requiring a shorter tube length.

2. Bright illumination provided by the world's first *1 laser diode illumination system-ideal for observations of large spaces
The IPLEX YS is the first industrial videoscope equipped with a laser diode illumination system. The directivity of laser light and the use of specially designed light guide fibers help to reduce light attenuation, with the result that the illumination from this system is around two times brighter than that available in earlier extra-long videoscopes *2. This feature is especially valuable for inspecting large spaces, which could not previously be viewed.