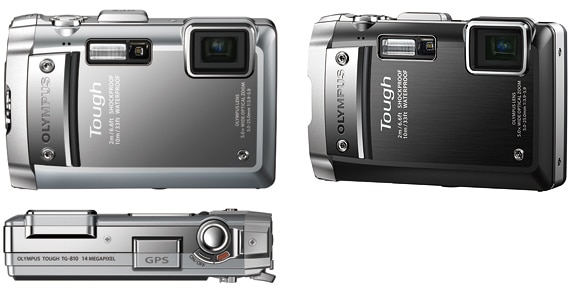 Olympus Imaging Corporation (President: Masaharu Okubo) is pleased to announce the OLYMPUS TOUGH TG-810 compact digital camera that incorporates waterproof to a depth of 10 meters*2, shockproof against falls from as high as 2 meters*3, freezeproof at temperatures as low as -10°C*4, crushproof loads up to 100kgf*5. Moreover the TG-810 is equipped with GPS functions*1 and electronic compass that record location data. It is scheduled to go on sale in Japan from late March, 2011.

OLYMPUS Tough Series of compact digital cameras feature a waterproof, shockproof and freezeproof design that assures reliable, high-quality shooting under conditions that ordinary cameras would be unable to endure, such as underwater or in cold winter conditions. From the tranquil to the turbulent, whatever the conditions, whatever the situation, this camera assures great results, giving users the opportunity to expand their enjoyment of photography.

The new TG-810 is a well-balanced digital camera between the tough performance such as waterproof to a depth of 10 meters, dustproof to keep out sand and dirt*8, shockproof against drop impacts from as high as 2 meters, freezeproof at temperatures as low as -10°C and crushproof loads up to 100kgf, and stylish design. The TG-810 also features GPS functions and electronic compass to record the location data of the shot. By only turn the GPS function ON and just shoot some photos, the camera displays landmarks on the monitor, or the country/region where you are shooting will be recorded automatically as well.

A 3-inch, 920K HyperCrystal III for Tough Series LCD monitor performs the superior visibility under the blaze of the sun such as on a beach or a snowy mountain. The TG-810 also incorporates a CCD-shift image stabilization mechanism, which used to be difficult to consist with shockproof feature. Combining with high-sensitivity image capturing, DUAL IS makes it easy to take pictures at the rugged outdoors, diving, or snorkelling without worrying a camera shake and a subject blur.

Behind its tough exterior, the TG-810 offers the full array of functions such as 3D Photos*9, Beauty Mode*10, Beauty Make, and Pet Mode. It also features the 5x optical zoom from the wide angle of 28mm*11, making it easier to shoot an expansive scenery or a group photo, and even an underwater photo which usually becomes smaller angle of view. The outstanding imaging power of a 14-megapixel CCD and the Olympus' imaging processing engine TruePicIII+ produce the high-quality, high-definition images.

GPS functions and Electronic Compass
The TG-810 features GPS functions and electronic compass to record the location data of the shot. By only turn the GPS function ON and just shoot some photos, the camera displays landmarks on the monitor, or the country/region where you are shooting will be recorded automatically as well. You can also use the camera to check your shooting direction in the field, to check your altitude while mountain climbing, or latitude and longitude. The electronic compass can be used as a regular compass even with the camera turned off. Moreover, you can used the recorded GPS data to visually search images by their recording location on a map by using Photo Surfing.

Tough features and DUAL IS
The TG-810 incorporates the tough features to be used in various rugged conditions. Its waterproof to a depth of 10 meters, shockproof from as high as 2 meters and freezeproof at a temperatures as low as -10°C makes it easier to enjoy shooting at various situations. To reduce the picture blur due to camera shake and subject motion, the TG-810 features DUAL IS using a CCD-shift image stabilization mechanism and high-sensitivity image capturing.

Watercolor: Enjoy transforming your images with a finish like that of watercolor paintings.
Sparkle: Enjoy photos with the luxurious feel created by the added twinkling lights.

3D Photo Shooting Function
You can shoot dynamic 3D photos in any mode from macro to landscape. Recreate a sense of depth like that of the original scene. You can then enjoy the full power of 3D images on compatible TV sets and computers. Simply select the 3D Photo in Shooting mode and then release the shutter and slide the camera sideways to easily get a 3D photo. During 3D Photo shooting, a 3D file and regular JPEG files are recorded at the same time. There are two modes to shoot 3D photos;

Auto mode: After taking the 1st image, pan the camera slowly to line up the on-screen image and the 2nd image will be shot automatically.

Manual mode: After taking the 1st image, pan the camera slowly to line up the on-screen image, and then press the shutter to capture the 2nd image manually.

First select 3D photo playback or ordinary playback, and then you can further enjoy the full power of 3D images by playing them back on 3D-compatible TV sets or computers.

MP Format (Multi Picture Format)
This is a format standardized by CIPA to handle multiple images under a single image file. When you use the 3D Photo Shooting function, the images for the right and left eye are recorded in a single MP format file.

Auto Release
The camera captures perfectly your pet's cute expressions. Use the Auto Release function to have the camera automatically shoot the photo the moment the dog or cat who is the main subject turns to face the camera. You will never again miss your pet's whimsical facial expressions.

Eye-Fi Card Compatible*17
Eye-Fi Cards are SDHC memory cards with built-in wireless LAN functionality. The images that you take can easily be uploaded wirelessly to your computer and to photo printing services and online albums, such as "ib on the net".