Olympus Imaging Corporation (President: Shuichi Takayama) is pleased to announce the introduction of the "OLYMPUS PEN E-P3", the flagship of the PEN series of new generation system cameras conforming to the Micro Four Thirds System standard, scheduled for release on 22nd July, 2011.

The OLYMPUS PEN E-P3 is an interchangeable lens type digital camera that conforms to the Micro Four Thirds System standard. Designed as the new flagship of the PEN series of new generation system cameras, the E-P3 is aimed at camera buffs looking for a camera that combines traditional style and functionality with advanced digital capabilities and top-notch performance.
Like previous models in the PEN series, the E-P3's remarkably compact design has been made possible by the elimination of the quick-return mirror, while maintaining key SLR advantages such as high performance and high image quality.
In fact, the E-P3 easily outperforms any other camera on the market with its powerful new FAST AF system. When combined with a lens incorporating the new MSC (Movie & Still Compatible) mechanism, which increases the speed and decreases the noise of autofocusing, the combination of AF's double-speed sensor drive and the double-speed detection processing allows the E-P3 to achieve the world's highest AF speed. At the same time, better-than-ever image quality is made possible by the new 12.3-megapixel High Speed Live MOS Sensor with 1080i full HD movie compatibility and the new TruePic VI image processing engine. High-sensitivity shooting at ISO12800 is also possible.
Simplicity and ease of use have always been the hallmarks of the PEN series, and the E-P3 is no exception. In addition to its convenient Main and Sub dials, the new E-P3 is equipped with a 3.0-inch, 610,000-dot OLED display whose excellent color reproduction and touchscreen panel provide the superior display capability and intuitive operability needed for creative image composition. The user interface's high-definition text and graphics support attractive graphical menus that are easy to see, easy to understand, and easy to use.
Recreating the timeless style of the classic Olympus PEN series, the E-P3's advanced performance is housed in an elegant, retro design with a durable metallic finish that exudes quality, reliability, and performance. A work of art in itself, the E-P3 features a new detachable grip, giving the user the opportunity to choose a grip most suitable to his or her shooting style; for example, an optional large grip can be used in place of the provided standard grip or the grip can simply be detached for a simpler look. Available in a choice of three colors - Silver, Black and White - the OLYMPUS PEN E-P3 brings a new level of performance to the world's most stylish line of cameras.
Another example of Olympus's commitment to relentlessly enhancing and advancing its line of new generation system cameras, this new camera is certain to expand today's fast growing market for lens interchangeable type digital cameras. 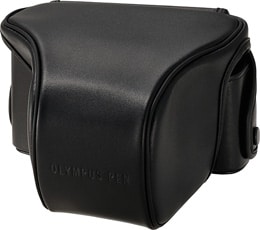