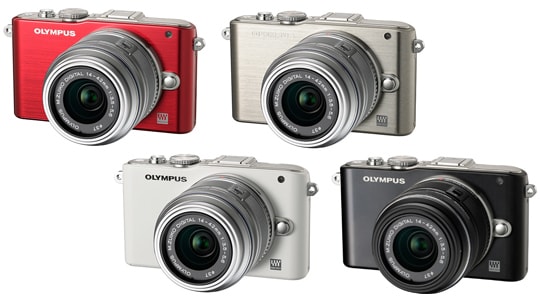 Olympus Imaging Corporation (President: Shuichi Takayama) is pleased to announce the introduction of the "OLYMPUS PEN Lite E-PL3", a new generation system camera that conforms to the Micro Four Thirds System standard. It is designed as the centerpiece of Olympus's popular PEN series of versatile, high-performance interchangeable-lens digital cameras.

Launched in March 2010 with the introduction of the OLYMPUS PEN Lite E-PL1, Olympus's "PEN Lite" models were originally designed to expand the digital SLR market by focusing on entry-level users. Now, however, that role has been taken over by the new line of "PEN mini" models, allowing Olympus to reboot the "PEN Lite" product concept, emphasizing the spirit of innovation and concentrating on putting big-size functionality and performance into a small-size body.

The first of the reborn "PEN Lite" models, the OLYMPUS PEN Lite E-PL3 is an interchangeable lens type digital camera that conforms to the Micro Four Thirds System standard. Combining the attributes of high performance and compact ease of use, the PEN Lite is designed to serve as the centerpiece of the PEN series of new generation system cameras. Its target is the young families who have special tastes for what they possess.

With previous PEN series models, the body size was reduced by eliminating the quick-return mirror while maintaining key SLR advantages such as high performance and high image quality. Olympus has made the E-PL3 even smaller by redesigning all of the internal structures.

One example of the complete redesign is the swivel type 3.0-inch HyperCrystal LCD - the first used in the PEN series. Incorporation of an up-down tilting mechanism give the E-PL3 real high- and low-angle shooting flexibility without compromising the compact size.

This camera also boasts sequential shooting performance of 5 fps and image quality built on the same advanced technology that powers the E-P3, the just announced new flagship of the PEN series, continuing with Olympus's policy of "providing the maximum image quality performance to all PEN models". Better-than-ever image quality is made possible by the new 12.3-megapixel High Speed Live MOS Sensor with 1080i HD movie compatibility and the new TruePic VI image processing engine. High-sensitivity shooting at ISO12800 is also possible. And all of this incredible performance is packed into a compact, lightweight body with a stand-alone weight of 262 grams.

The Art Filters so popular on previous Olympus cameras have been refined and improved for the new generation with the addition of "variations" that can be used to slightly change the atmosphere of the filter. The Art Effect function, which can add various composition effects to Art Filters, has also been enhanced with new "Starlight" and "White Edge" effects. These composition effects allow the user to utilize individual expressions and obtain more benefits from the Art Filters. Naturally, the expressive power of the provided six Art Filters can be enjoyed with both still images and movies.

1. First PEN series camera with a swivel type 3.0-inch display. Tilts 80° up and 45° down for improved functionality and compatibility with size reduction

2. The same high image quality as the flagship "E-P3", all in a solid little package

Olympus has been supporting the creativity of photographers by incorporating easy-to-use Art Filters in its interchangeable-lens digital cameras. The new E-PL3 incorporates six of the most popular Art Filters, identical to those incorporated in the E-PL2.