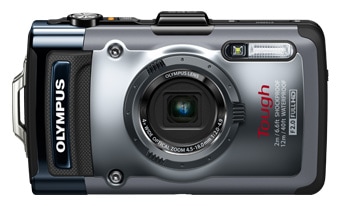 Because the OLYMPUS Tough series concept is based on shooting in difficult situations that previous camera's could not endure, such as under water and while climbing snow mountains, the Tough camera is equipped with three important functions: Waterproof/dustproof, Shockproof, and Freeze proof. As the OLYMPUS Tough flagship model, the Tough TG-1 is not only the series toughest model to date, but boasts excellent high-speed performance.

It is said that image quality hinges on the three components of the image sensor, image processor, and the lens. For the Tough TG-820/TG-620 announced on February 8, high-speed, high-sensitivity, and low noise were achieved by using a backlit CMOS sensor and the image processor, which is usually employed in SLR cameras. In addition, the Tough TG-1 is also equipped with a lens brighter than on any previous models, making it a digital camera that even photo enthusiasts can love.

This bright, f2.0 lens goes far beyond any previous tough camera, possessing a brightness that is far above and beyond the rest. A bright lens enables use of faster shutter speeds when shooting, and is called a "high-speed lens". High-speed lenses allow shooting even of night scenes and in bad weather when there is insufficient light. The lens keeps the ISO speed to a lower value, reducing noise, and resulting in beautiful images.

In addition to improved image quality due to iHS, the combination of the backlit CMOS sensor and SLR image processor TruePic VI dramatically improves the camera's operational speed in the following three areas: the time the camera is powered on until shots can be taken, time necessary for focusing, and continuous shooting function.

The 4x zoom lens boasts an super wide 25mm to 100mm equivalent angle of view at the telephoto end. Two additional separately-sold lenses are also available. With the fisheye lens users can shoot at extremely wide angles, and the tele-converter lens allows an angle of view up to an equivalent of 170mm. Both lenses are completely waterproof, satisfying the needs of this outdoor-system camera.

The OLYMPUS Tough, released in 2006, was the world's first completely waterproof digital camera. While maintaining and improving its tough capabilities, we have done our best to respond to the demands of photo enthusiasts who love shooting outdoors. The TG-1 is the flagship Tough model, promising toughness that will survive the great outdoors, speed to match the reflexes of outdoor users, and the highest image quality in the harshest conditions. The TG-1 is the ultimate outdoor camera, letting users capture scenes and images that were impossible until now.

High-speed f2.0 Lens
The TG-1 is the first Tough camera to include a high-speed f2.0 lens, making high-quality images and a high-speed shutter possible even in places where the flash cannot be used, and when the flash cannot reach the subject.
Not only is the lens bright, but it boasts focal lengths from wide-angle 25mm (35mm film equivalent) to a mid-telephoto 100mm, which is excellent for nature photography. Super Macro Mode is perfect for shooting close-ups, with a minimum shooting distance of 1 cm away from the end of the lens.
The newly-designed lens consists of nine lenses in seven groups including four aspherical lenses. It includes technology cultivated on the high-end compact digital camera OLYMPUS XZ-1 to not only provide high image quality, but prevent all kinds of aberration. Coexisting with these features is the highest toughness qualities to date, such as waterproof functionality, shockproof functionality, cold resistance, and crushproof functionality.
This first Tough camera to include a high-speed f2.0 lens is the product of developers' intense desire to create a better camera. Included in this was the desire to do away with camera shake and subject blur. Not only did they want to achieve an aperture value of f2.0 at the wide-angle end, but maintain brightness at the tele-photo end as well. However, to make a brighter lens, the lens position on the camera and the internal optical elements would have to be drastically changed. To this end, the lens and optical element layout was completely reworked, keeping the lens in the center of the camera. Because of these changes, however, advantages presented themselves, such as the possibility to attach converters and other accessories.
Additionally, but moving the shock-absorbing damper from the front to the side of the camera, the overall camera size has been reduced, while maintaining drop shock resistant functionality.
The combination of toughness and high image quality enable shooting in even the harshest conditions, making it possible to capture images like never before.

iHS Technology
iHS technology is a new technology, available for the first time on compact digital cameras this spring. iHS stands for "intelligence", "high-speed", and "high-sensitivity".
With the combination of the 12 megapixel back-illuminated CMOS sensor and the TruePic VI image processor developed for the OLYMPUS PEN, high sensitivity, low noise, and a high-speed AF have been achieved. Even in backlit or nighttime scenes the camera can beautifully capture images, just as they are seen by the human eye. With HDR backlit correction, in a single shot, the camera captures three images at different exposures and automatically merges them into a single image. With Super Resolution technology, users can zoom up to 8x with minimal image degradation. With Intelligence technology, iAUTO can automatically detect thirty different types of scenes.

GPS and electronic compass
The TG-1 is equipped with a GPS function and electronic compass (e.compass) to record the location information of where images were shot. By simply turning the GPS function on, Landmarks will be displayed on the monitor when shooting. After shooting, Landmarks from approximately 700,000 choices and 195 countries will be automatically recorded. In the Active Gear screen, users can check the direction, latitude and longitude in the field. The e.compass can be turned on even when the camera is turned off. With the Photo Surfing function, users can find images based on map locations on the camera screen to call up related images.
Place name information inside Japan is provided by Shobunsha Inc., and outside of Japan is provided by NAVTEQ.

GPS Logger
The GPS Logger records positioning information to the SD card for a specific interval of time.
By loading the recorded positioning information onto a computer, and using Google Earth or another Web application, users can view the route traveled with their camera on a map. (On [ib], there is no function for loading GPS log to view on a map. Google, Google Earth, and Google Maps are trademarks or registered trademarks of Google Inc.)

A-GPS
A-GPS is part of a technology that allows users to check their current location. In cameras equipped with A-GPS, the technology uses GPS assist data via a PC application to drastically shorten the time it takes to acquire location information from satellites.
(To acquire GPS assist data, it is necessary to preinstall software on a PC and then connect the camera. GPS assist data is updated once a day.)

Super Sports Mode
In the new Super Sports Mode, users can shoot sequentially at 5 fps as the camera is set to high shutter speed priority. Whereas the previous Sports Mode could not keep up with intense indoor sports, this new mode can capture quick movements without any problems.

Low Light Mode
Low Light mode is perfect for capturing the mood of low-light scenes indoors or beautiful sunsets at the end of a day of camping, without losing the atmosphere by using the flash. Users can forget about subjects blurring or camera shake ruining the shot; Low Light mode covers all of these situations.

Full High-Definition Movies (MOV/H.264)
Full High-definition size 1920 x 1080 movies, and an extremely good compression format for computers
With MOV and H.264 formats, longer movies can be shot more smoothly and beautifully. With a dedicated movie button, starting and stopping movies is easy with a single touch. The TG-1 is also equipped with Multi-Motion Movie IS image stabilization. Because this function corrects for the gradual camera shake that commonly occurs when shooting a movie while walking, users can more fully enjoy shooting beautiful, high-quality movies.

Beauty Make-up Mode
Make-up Mode has been added to Beauty mode, allowing users to enjoy adding makeup to subjects in recorded images.
This function offers a full range of nineteen different effects that will make women happy. Because effects are divided into four different themes such as Makeup, Eye Effects, they are easy to choose from.
The Makeup menu screen is packed with cosmetic choices such as Cheeks, Eye Shadow, and False Eyelashes, so that users can easily choose and apply effects. In the Eye Effect menu, users can not only change eye color, but make eyes appear bigger. In the Spa menu, users can make subjects faces appear smaller, and add effects such as to make faces look even more beautiful, such as Lift-up.

3D Photo
The TG-1 also supports 3D Photo, for turning everyday pictures into dynamic shots.
This function captures a 3D image, reproducing the look of the actual scene. Images can be enjoyed on TVs or computers that support 3D image display.
Users select the 3D Photo shooting mode, and simply slide the camera sideways while pressing the shutter button to capture a 3D image. Both the 3D Photo data (MPO format) and JPEG image data will be saved. There are two types of shooting methods: Auto (after one shot is taken, the second shot is automatically taken when the camera is moved horizontally to match a semitransparent layer) and Manual (after one shot is taken, the user takes the second shot after moving the camera horizontally to match a semitransparent layer). For playback, users first select either 3D playback or normal playback, and then images can be viewed on a TV or computer that supports 3D image display.

Auto Shutter
Capture pets' cute expressions. With Auto Shutter, the camera will automatically shoot when a pet faces the camera head-on. With this function, users won't miss the whimsical antics of their pets. (Auto Shutter can detect only one pet.)

Eye-Fi Support
Eye-Fi cards are SDHC memory cards that contain an internal wireless LAN. Images can be wirelessly uploaded to picture services such as [ib on the net], online photo albums, and computers.

SNS Upload Function
This function satisfies the demand of users who want to upload still images to social networking sites, such as Facebook and Flickr.
By adding images users want to share to an upload list on the camera, they can easily be uploaded to the desired social networking service.
To upload images, users simply add recorded images to a list on the camera, and then transfer them to a computer. Images added to a list can be searched with a single touch, and then easily uploaded. (It is necessary to preinstall the included software (OLYMPUS Viewer2 on a computer.)