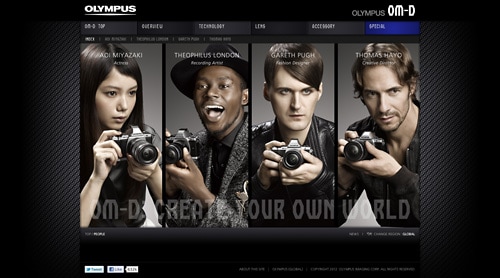 Olympus Imaging Corporation (President: Haruo Ogawa) is pleased to announce the launch of new web content, titled "Peoples Campaign," in the OLYMPUS OM-D dedicated web site, as part of a promotion for the OLYMPUS OM-D E-M5. Well-known artists from Japan, the United States, the United Kingdom, and Germany appear in the campaign and it is scheduled to launch on July 20, 2012.

The OLYMPUS OM-D E-M5 and its dedicated web site (URL: http://olympusomd.com) have been received favorably since their launch this past March.
To express the perspective of the OLYMPUS OM-D through the medium of human figures, Olympus will launch the Peoples Campaign in the OLYMPUS OM-D dedicated web site, featuring four well-known artists -- an actress, a recording artist, a fashion designer, and a creative director -- who represent the expressive creativity, sophisticated design, and classic good looks of the OLYMPUS OM-D. In addition to biographies and images of the artists, the web site includes videos of interviews with the artists and photographs taken by the artists using an OLYMPUS OM-D, providing for an introduction to the camera from a different point of view.
This new content will be available in 31 different languages, allowing people all over the world to learn about the OLYMPUS OM-D through the Peoples Campaign.

The Peoples Campaign does not merely introduce a camera but offers content that focuses in on people and their creativity, making the web site appealing not only to OLYMPUS OM-D users, but to a much broader range viewers including novice photographers and users of cameras produced by other manufacturers.

Aoi Miyazaki debuted as a child actor at age 4. In 2001, she received the Best Actress Award at the 23rd Festival des 3 Continents in Nantes for her role in Harmful Insects - Gaichu, her first movie role. Then, in 2002, she received the Best New Actress Award at the 16th Takasaki Film Festival for her role in EUREKA. In 2003, she received the Best New Actress Award at the 41st Golden Arrow Awards for the musical The Little Prince, where she acted in the lead role in her first stage performance. Furthermore, she earned the Broadcast Award (Drama Category) at the 44th Golden Arrow Awards for her 2006 performance as heroine Sakurako Arimori in the NHK drama serial Junjo Kirari. In 2008, she became the youngest actress to play the lead character, Atsuhime, in the NHK period drama Atsuhime. While focusing on film, stage and television commercials, she also displays a versatile repertoire including animated films, documentary narration and more.

Brooklyn born musician Theophilus London was first most known for his self‐starting music trajectory- the artist released three wildly popular mixtapes projects before ever being signed to a label. His creative spirit, which couldn't' be defined by a particular genre, attracted a loyal fan base which made him an instant indie darling. Once his music caught on he became equally known from his style icon profiles in GQ, Esquire, Elle, NY Times, Complex, Fader and NME. In July 2010 the artist released his debut LP Timez Are Weird These Days on Warner Bros Music label. Theophilus will start writing his next LP this Fall but in the meantime is excited to share Rose Island vol.1 a free mixtape dedicated to his fans (released on lvrs.tl in July).

English-born fashion designer Gareth Pugh has received global recognition for his approach to redefining modern luxury. Educated at London's Central Saint Martin's, Gareth's clothes have been described as wearable sculptures - experimental forms, volumes and fabrics are all signature to Gareth's ever evolving style.
Gareth has worked with some of the world's most celebrated artists including Beyoncé, Lady Gaga and Kylie Minogue and continues to collaborate with leading editorial and creative forces in the fashion and entertainment industries.

Thomas Hayo is a German born Creative Director and TV personality working and residing in New York. His work has been recognized by all major national and international Award Shows, including the International Advertising Festival in Cannes, where he has received multiple gold as well as silver and bronze lions. His work is also part of the Permanent Collection of the Museum of Modern Art in New York. In addition to that, he has been co-hosting one of the most successful German TV shows, Germany's Next Top Model by Heidi Klum.