The International Engineering Fair MSV, held each year in the Czech Republic's second-largest city of Brno, is a major world-class industrial fair supported by the Czech government and various Czech industry groups. Medals are awarded to innovative industrial products at this fair. 1,873 exhibiting companies from 32 countries participated this year.

Olympus received the gold medal for the IPLEX TX videoscope, the second gold medal Olympus has been awarded in the last five years. With the growing needs for quality inspection in the automotive industry, a key industry in Eastern and Central Europe, the IPLEX TX ultra-thin videoscope has gained wide recognition for its contribution to improved inspection accuracy in small automotive parts. 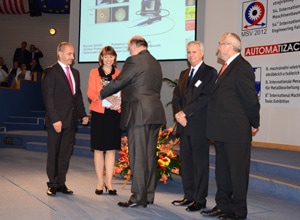 The IPLEX series of industrial videoscopes is a part of the Olympus product lineup of non-destructive testing instruments and features a high level of maneuverability, refined image quality and wide array of advanced functions for enabling high-accuracy inspections.

Launched in July 2012, the IPLEX TX is an industrial videoscope with scope articulation controller. Despite having the world's narrowest scope*2 at a diameter of 2.4 mm, the IPLEX TX provides excellent durability and high-image-quality inspection. This enables the IPLEX TX to obtain high-quality inspection images in extremely confined spaces, such as in narrow spaces in castings and molds and inside ultra-thin tubes.