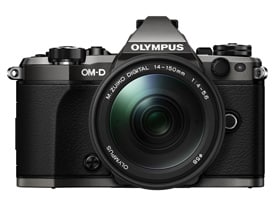 Olympus Corporation (President: Hiroyuki Sasa) is pleased to announce the OM-D E-M5 Mark II Limited Edition Kit is scheduled to go on sale from the end of June, limited to only 7,000 sets worldwide. This kit includes the OM-D E-M5 Mark II, Compact System Camera in the same special titanium body color as the SLR film camera OM-3T/Ti (1994), a specially-crafted leather strap, a leather card case and owner's card numbered from 1 to 7,000 to authenticate that it is a limited edition.

The OM-D E-M5 Mark II went on sale February 2015 as the latest model in the OM-D series. The body features a quintessential camera style with a design reminiscent of the OM film camera series in every detail. Its distinctive design and presence have garnered high praise for this Compact System Camera.

The OM-D E-M5 Mark II Limited Edition Kit comes with a camera that fully inherits the unfading design of the OM film camera series, applying the titanium color of the OM-3T/Ti that went on sale in 1994. This special color body displayed at this year's CP+, is now available in a limited quantity of 7,000 sets worldwide in response to high demand from customers.

1. Titanium color reminiscent of the OM-3T/Ti

Since the OM-1 went on sale in 1973, the OM film camera series has pursued the pinnacle of mobility and reliability in its compact, lightweight form. The OM-3, which went on sale in 1984, strongly represented those fundamental concepts, and the titanium OM-3T/Ti added in 1994 was the symbol of those ideals.

Even the accessories for this OM-D E-M5 Mark II Limited Edition Kit are special, further enhancing the value of this camera. The dedicated strap and card case feature high quality stitching and genuine leather, finely balancing colors that match the titanium color body of the camera. These accessories are finished with the grace and charm that befit a Limited Edition camera. Finally, an owner's card numbered from1 to 7,000 authenticating that this is one of 7,000 sets and the words from Yoshihisa Maitani, father of the legendary OM series are included on the back of the owner's card. The OM-D E-M5 Mark II Limited Edition Kit is a truly special OM-D E-M5 Mark II that is sure to bring pride and happiness to those who are able to get their hands on one.