Live cell imaging involves the observation of living cells and recording the results as digital images. Olympus has announced a new series of research inverted microscopes, which are an essential tool in this field. Here, representatives of marketing and R&D explain how marketing identifies the latest needs and what technologies R&D uses to meet these demands.

Information of this article is based on the facts as of September 30, 2012.

Has worked as a Product Leader on biological microscopes. This included a front-line role as the Product Leader for the earlier IX2 Series, as well as coordinating product development for the new IX3 Series in his role as Product Manager. He has also had extensive experience in overseas postings, including in the United States and Europe.

His first real exposure to the world of biological microscopes did not come until he joined Olympus. He worked on optical lens design for five years before being posted to Europe. He's worked in marketing since back to Japan. His role involves identifying customers' real needs from diligent market research and utilizing this information in product planning.

Use of Microscopes to Observe Live Cells

Live cell imaging is currently a subject of great interest in the field of microscopy. It involves inserting a culture dish into the microscope and observing the cells in their live state. This method of observation is being widely adopted in areas such as advanced life science. Examples include such studies as how tumors form and multiply and what benefits are provided by newly developed drugs. How cells communicate with each other is a particularly important consideration in this work and this requires being able to observe live cells.

Interviews Conducted with 100 Research Institutions from Around the World 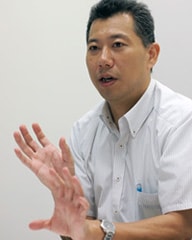 The predecessor to the IX3 Series is the IX2 Series, which went on sale exactly 10 years ago. The work of the global marketing team started with rigorous efforts to find out what customers had to say about this earlier model.

Advanced life science research takes place in all parts of the world. IX2 Series users are distributed between Japan, the United Statues, Europe and Asia in roughly uniform numbers. Accordingly, the global marketing department visited approximately 100 universities and other research institutions to survey their requirements. What came to the fore from these meetings was a demand for automation and expandability.

Objective of Automation was to Halve Operating Time

Looking first at automation, live cell imaging involves working with live cells. This means observations are, to some extent, a race against time. For example, exposing cells to excessive light over too long a time to make the observations will result in unnecessary cell damage. In some cases, taking too long will result in the cells dying. This means making greater use of automation to keep the observation time as short as possible is very important. 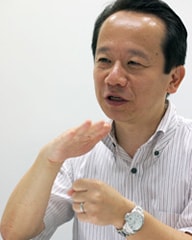 The previous IX2 Series was the first inverted microscope from Olympus to incorporate computer control. While this feature was very well received when the microscope was first released, technology has since made considerable progress and it became clear demand now was for an even higher level of automation. Accordingly, to facilitate automation, R&D set an objective of halving the operating time for electrical control.

A practical example is the use of time-lapse observations, a common technique in live cell imaging. This involves collecting observations by capturing digital images at regular intervals. One method used with time-lapse observation is to change to a different wavelength at each time interval. This is done by rotating a series of filters that have been setup in the microscope in advance so as to switch to a different filter each time. This means doubling the speed of the motor that rotates the filters has the effect of halving the time taken to switch between filters. Although improvements can also bring new technical problems as well as pushing up costs, the objective was achieved by working diligently to resolve these constraints one at a time.

The performance of auto focus was also significantly improved. The main technique used on biological microscopes to view the inside of cells is called fluorescent observation, a method in which observations are made against a completely dark background. This means achieving focus is difficult even for an experienced researcher. Nevertheless, the new microscope is able to focus closely on the cells, rapidly and at the push of a single button.

When observations take a long time, the temperature of the laboratory will also vary. Being made of metal, the microscope will necessarily expand or contract depending on the ambient temperature. Because this will cause the specimen to shift, a tracking mechanism able to maintain the correct focus over time has been a feature since the IX2 Series. However, even if the operating time for each process can be shortened, it is no use if the actual operation is cumbersome. Accordingly, a special-purpose controller was developed that provides easy operation using a touch panel. For example, as soon as you touch the screen to select an observation method, the microscope reconfigures itself internally with the correct lenses and other optical components. Eliminating human intervention also eliminates worries about human error. 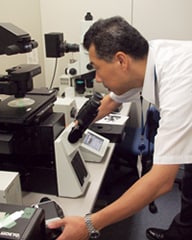 Moving on to the question of expandability, switching between functions on the previous IX2 was done by inserting and removing units. This design allowed the user to insert the unit required to make the observations needed for their particular research. While this was recognized as a revolutionary new system, it was also clear there was strong demand to make the units easier to insert and remove.

To overcome this challenge, developers decided to adopt a deck system. The microscope design leaves a large empty space under the stage where two deck units can be inserted. This gives the user the flexibility to insert two different types of camera, or different light sources to suit particular observation methods. Insertion and removal is accomplished easily using a supplied tool. A number of units are already available and it is possible to use units that have been customized for specific users. 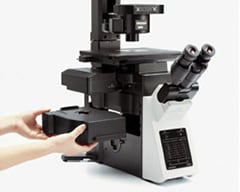 However, allowing two different decks to be inserted creates a difficult problem. The microscope becomes more susceptible to vibration due to the increased height of the microscope body. Also, the increased number of metal parts makes the microscope more prone to thermal expansion, raising the likelihood of the specimen being shifted out of alignment by variations in laboratory temperature. In response, instead of leaving the area below the stage open as in other microscopes, the developers decided to enclose it by using a square frame design. This ensures sufficient rigidity.

Challenge for an Optical Equipment Manufacturer

We overcame obstacles to automation and expandability in this way. However, developers still faced one more challenge, which was the design of a new optics system, meaning the combination of lenses, mirrors and other components that collect and transmit the light to form an image.

The objective lens in a microscope provides a view of the specimen (field of view) with a size that depends on the magnification. When using a camera, the size of this field of view is also ultimately determined by the camera's image sensor (chip). This means the features of interest will be too large to fit in the field of view for some specimens.

Advances in camera technology are changing this situation. This is because cameras with large chip sizes are becoming available at reasonable prices. This enables expansion of the field of view for a given magnification by upgrading the optics design.

The development of the new IX3 allowed for the use of cameras with the latest large chip sizes.
However, this turned out to be an unexpectedly difficult challenge. While use of a wider field of view can be accommodated by designing larger optics, doing so allows unwanted light to get in and obscure those features the user is trying to observe. Unlike viewing with the naked eye, small variations in the light level can have severe consequences for the image as cameras have high sensitivity.

As a result, a challenge for the developers was blocking stray light and ensuring only the desired light was captured. While optics performance can increasingly be ascertained from computer simulation, ultimately the only way to assess the level of image clarity is to take actual photographs. This led to day after day in which huge numbers of images were repeatedly taken and compared until we finally reached a stage where we could be satisfied with the level of performance and the size of the field of view.

Growing Together with Cutting-Edge Researchers 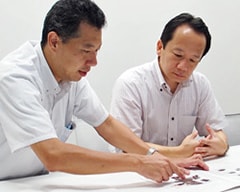 The task of researchers engaged in cutting-edge research is to put their imaginations freely to work on coming up with new discoveries. Our hope for the new microscope is that the greater expandability enabled by the deck system will give rise to more of these new discoveries.

Our work does not end when the product is delivered. We are already working on preparing a number of new units for sale and our ideal is to bring about our own growth by supplying units that make the imagined worlds of our customers a reality.