THUNDERBEAT, developed by Olympus Medical Systems, is now available in the US, Europe and some markets in Asia. THUNDERBEAT is the world's first integration of both bipolar and ultrasonic energies delivered simultaneously from a single instrument.

Where did the idea to integrate these two energy technologies come from? How did Olympus overcome challenges in bringing such a product to market? Mitsumasa Okada, the general manager of the Therapeutic Products Department at Olympus Medical Systems, and Masato Takenouchi, a manager in the Surgical Marketing Department, explain the background and stories behind this new technology and discuss the evolution of laparoscopic surgery.

Mr. Mitsumasa Okada currently serves as the General Manager of the Therapeutic Product Department. His department is responsible for the development of innovative surgical energy devices with particular emphasis on the application of ultrasonic technology in surgery. Under Mr. Okada's leadership, his department, in collaboration with our European engineering facilities, reached an unprecedented technological breakthrough with THUNDERBEAT, the world's first integrated bipolar and ultrasonic medical device.

Mr. Takenouchi currently serves as a Manager of the Surgical Marketing Department. Mr. Takenouchi has over 3 years of extensive international marketing experience, serving as a European marketing liaison from 2007 to 2010, and has led numerous successful Urology product launches during his tenure as product manager. Mr. Takenouchi was recruited to head the marketing team in launching THUNDERBEAT energy products worldwide. 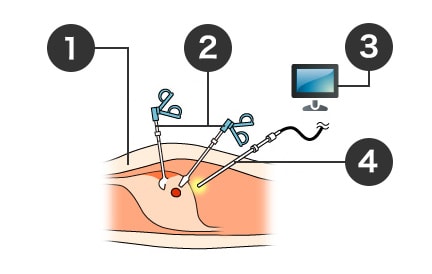 Say the word "surgery" and the first image that comes to many people's minds is that of a large incision across the abdomen, or Open Surgery. However, surgical procedures have changed radically in recent years: Starting in the 1990s, a growing number of surgeons have transitioned away from open surgery and opted to perform surgery through several small incisions made in the abdomen. Surgery is performed by inserting a laparoscope into one incision to display the inside of the body on a video monitor and by inserting the necessary forceps and instruments through other incisions. This form of surgery is referred to as laparoscopic surgery.

How we can Prevent Bleeding 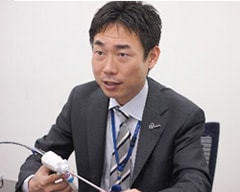 One of the most important factors when cutting tissue during a laparoscopic procedure is the ability to prevent bleeding. With laparoscopic surgery, controlling bleeding once it occurs can be more difficult than with open surgery. To deal with this, surgical devices that can both cut tissue and seal blood vessels are commonly used. These devices seal vessels by denaturing proteins in tissues at high temperatures, causing vascular walls to stick together. After sealing, the tissue can then be transected.

These medical devices use some kind of energy to heat the tissue and are referred to as "energy devices." There are two types of energy devices commonly used in the market; bipolar devices that utilize high-frequency electric current and ultrasonic devices that utilize ultrasonic vibrations. Each energy device offers different benefits and is selected based on the situation and type of procedure. First, let's take a look at the characteristics of each device type.

Differences between Bipolar and Ultrasonic Devices

However the maximum temperature reached with this device is only around 100℃, which is not enough to cut tissue. Once vessels have been sealed, an independent blade can be used to the cut the tissue without fear of bleeding. While this kind of device is capable of reliably sealing blood vessels, the procedure involves two steps: activating the current and cutting the tissue.

One of the major benefits of ultrasonic devices is that sealing and cutting are done in one step. The tissue is grasped between the "probe" and jaw and strong ultrasonic vibration is generated to produce frictional heat. As the proteins denature and the tissue temperature gradually reaches 200℃ the tissue is broken apart or transected. Although ultrasonic devices have sealing and cutting capabilities, they lack the same level of sealing ability as that of bipolar devices. 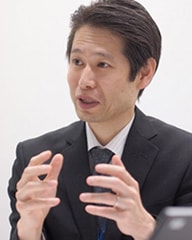 A lot of our progress in developing medical devices involves meeting with cutting edge surgeons, hearing their opinions on currently available devices, and uncovering what needs to be improved. One request from a surgeon was to create a device that exhibited the speed and dissection capabilities of an ultrasonic energy device with more reliable blood vessel sealing capabilities. Bipolar energy devices are better at sealing vessels but are cumbersome to use. Doctors simply acknowledged that these two types of devices had their own inherent weaknesses and used them accordingly.

One particular visit to the operating room provided us with the inspiration for this technological breakthrough. The surgeon was using a bipolar device to coagulate the tissue, and then exchanged it for an ultrasonic device to cut the tissue and remarked on how well this technique worked. It was in this moment when we identified a possible solution for these cumbersome instrument exchanges - an integrated bipolar and ultrasonic energy device that simultaneously reliably seals blood vessels and rapidly cuts tissue.

A Large Barrier to Becoming the World's First

Luckily, Olympus possessed both bipolar and ultrasonic technologies. Effort was then put into developing a simple prototype integrating these two technologies. 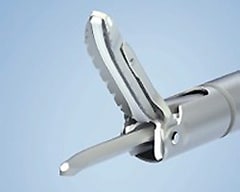 Naturally, this required much trial and error because we were attempting to develop technology that was first of its kind. Even determining the shape of probe that would grasp the tissue was challenging. For example, in the initial stages of development, it was discovered that a simple rectangular shape of probe is not ideal for effectively transecting. So, after a long period of trial and error, we perfected the shape of the probe to its current triangular shape.

After devoting so much time to the project, we were overcome with relief when we finally achieved the desired functionality. We showed our prototype to a US surgeon and we'll never forget the happiness we felt when he congratulated us on our success. Although it was a long and arduous process from the initial prototype phase, we were able to perfect the product based on expert feedback from top surgeons in Japan, United States and Europe.

The shape of the tip required the most important design decisions. The most basic function of surgical instruments is their need to securely grasp and separate tissue. Constant feedback from top surgeons allowed us to tweak our design until we found the perfect tip shape. Our design now features teeth that taper toward the tip to prevent slippage when grasping tissue.

We even utilized a special "wiper mechanism" that can be found in other commonly used products. This special mechanism utilizes the structure of windshield wipers. In the middle of a windshield wiper is a pivot that allows the wiper to maintain contact with the windshield by altering the angle of the wiper. We integrated this technology into our device by adding a pivot in the middle of the tissue. This pivoting mechanism allows for strong yet even compression of the tissue from the base to the tip of the jaw. Applying a uniform amount of force allows for stronger and more reliable better sealing of blood vessels.

A Single Device for Numerous Applications 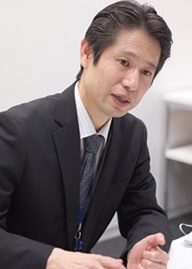 The basic tasks in any operation are: seal blood vessels, dissect tissue grasp tissue, cutting and hemostasis of bleeding sites. Currently, surgeons switch between different instruments for each task as necessary. 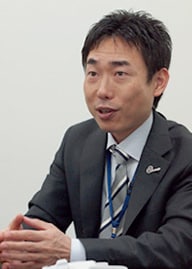 Our newly developed THUNDERBEAT achieves the high performance capabilities we anticipated for all of these actions. In addition to the simultaneous bipolar and ultrasonic energy output mode, THUNDERBEAT also has a built-in SEAL bipolar only mode that seals without cutting the tissue. As such, this one device is capable of handling all actions required during surgery while still maintaining a high level of performance, allowing doctors to continuously and effectively perform surgical procedures. The reduction of operating times alone will help contribute greatly to the field of surgery.