The Olympus Group published the Olympus Global Code of Conduct to define the ethical standards for the actions that all group members always act in a manner. We place the highest value on "Respectful Behavior." Under the Code of Conduct, we clearly declare that we do not allow harassing behavior or discrimination based on personal characteristics like gender, age, nationality, ethnicity, skin color, political views, sexual orientation, religious beliefs, social background or disability. "Show appreciation for diversity of people, views, and work styles" and "Never discriminate against job candidates or employees" are two examples of "What we do". With these basic codes of conduct fully implemented, we provide all employees with equal opportunities to fulfill their potential and improve their abilities as well as opportunities to work, develop their abilities and gain promotion according to their level of competency.
In April 2019 we introduced a corporate transformation plan Transform Olympus, a global-scale human resources development system that serves as the basis for our global employees to follow our Corporate Philosophy (Our Purpose and Our Core Values), and to encourage each employee to take on ambitious challenges for personal growth. Under our transformation plan, we will assign employees in the most efficient way without regard to nationality or gender to encourage our diverse human resources to work effectively. Especially in Japan, we plan to expand the use of our "job-based" personnel system, starting from Olympus. This allows the company to assess individual employee's performance and reward their achievements in a fairer manner with the conventional Japanese style "membership" personnel system, in which the employee's years of service and age are given greater account in their career assessment. The job-based system should also provide a way for employees to pursue their expertise and aim at further career advancement.

In the Olympus Group, the President is ultimately responsible for our strategy for human resources including human resource development and labor management, while the senior executive officer in charge of employment and labor issues implements our group-wide human resource strategy through the functions of the HR division at the headquarters.
We are implementing measures to ensure that we follow labor-related regulations in the various countries in which each subsidiary and division operate in compliance with the Group's human resource strategy to ensure diversity in human resources for optimal business management.
Olympus and its Japan subsidiaries are sometimes located in one facility. Each facility has its own general manager to ensure comprehensive implementation of policies and measures involving personnel and labor issues. 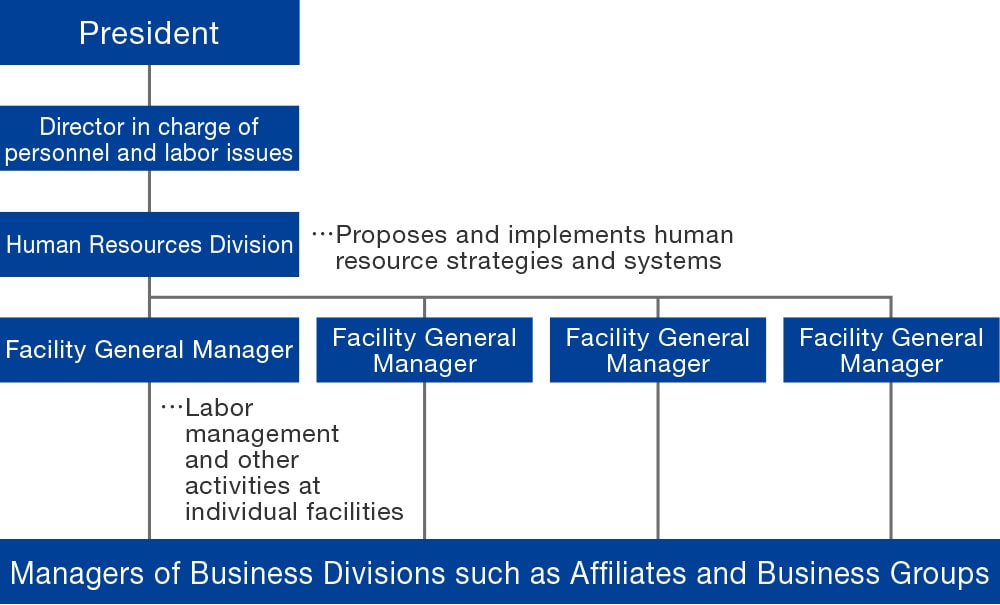 Olympus hired 90 employees (only full-time employees) in FY2021, down by 73% over the previous year. Of these, mid-career employees accounted for 37% of the total.
Also, the hiring of women was actively promoted in line with the Act on Promotion of Women's Participation and Advancement in the Workplace, and the percentage of female employees increased by 7.9% to 36.6%.

Employment of People with Disabilities

Olympus proactively works to employ people with disabilities (physical, mental, and intellectual), and after recruitment, they work in a wide range of fields, including general administration and engineering fields that include manufacturing technology and IT development. Established in April 2009, our special-purpose subsidiary* Olympus Support Mate is now in its twelfth year of the foundation and hires essentially persons with intellectual disabilities. We have created working environments and working conditions that are appropriate both for the nature of each individual's disabilities and the operational requirements required to ensure that they can continue to work there. Following Aomori Olympus and Aizu Olympus, Shirakawa Olympus created a cleaning service group of Olympus Support Mates in April 2021, to provide jobs and fulfilling lives for persons with disabilities in the local communities. We also started an office chair cleaning business to maintain comfortable working environments in our business sites. As of April 2021, eight companies in the Olympus Group achieved a combined employment rate of 2.6%, exceeding the statutory rate of 2.2%. Olympus Terumo Biomaterials employs an athlete who aspire to participate in the Paralympic Games and actively supports their activities.

* Special-purpose subsidiary
A subsidiary approved by the Minister of Health, Labour and Welfare under the provisions of Article 44 of the Act on Employment Promotion, etc., of Persons with Disabilities as an organization that gives special consideration to the employment of people with disabilities and is deemed as one of the business offices of its parent company.

Employment of the Elderly

Olympus and its Japan subsidiaries have a system to continue employing employees who want to work for the Company after reaching the retirement age of 60 until they become 65 years old.
In FY2021, 113 people qualified for the system, and 100% of the employees requesting continued employment were hired accordingly.

*3 Since the Company has transferred the Imaging Business in the fiscal year under review, it is excluded from the segments above.

*4 Since the fiscal year under review, the calculation method of the Headquarters Administration Department has been changed.

*5 The number of employees includes the retirees who utilize career support for external opportunity.

Olympus and its Japan subsidiaries

*3 The percentage of those who remain in the company as of March 31, 2021, out of those employed in FY2019 (including new graduates and mid-career employment).

*4 The percentage of those who remains in the company at March 31, 2021 out of those employed as new graduates in April 2018.

*5 Including on-loan in the Group.

*9 Measures to prevent the spread of COVID-19 and work restriction were implemented this fiscal year, and so many employees used the work-at-home system temporarily.

* Figures are for full-time employees unless otherwise stated.