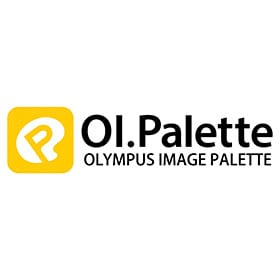 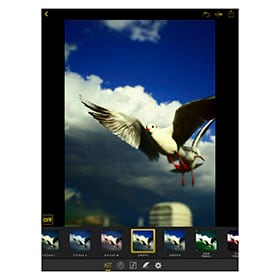 * Available to downloaded from the App Store and Google Play

Olympus Image Palette (OI.Palette) is an app that provides popular features from Olympus interchangeable lens cameras such as Art Filter, Art Effects, Color Creator, and Highlight & Shadow Control, on smartphones and tablets with intuitive controls. This is the third app to include Art Filter on smartphones and tablets after Olympus Image Share (OI.Share) and Sweet Photo.
OI.Palette includes all 28 Art Filter options (including types) that can be combined with 8 effects (Art Effects). Some features are included for the first time on a smartphone and tablet app, such as Color Creator, which lets you emphasize the hue and change color saturation, as well as Highlight & Shadow Control, which makes it possible to adjust details in highlights and shadows that are difficult to manipulate with exposure compensation. These options can be combined to create impressive photos.
In addition to being able to add handwritten signatures to photos, other functions can be used to fine tune images with intuitive controls on smartphones and tablets, such as adjusting the tilt, changing the aspect ratio, and trimming photos.
Finished images can then be posted to social networks directly from OI.Palette without using another app.
When linked with OI.Share, which is used to import images captured on Olympus digital cameras, you can seamlessly edit and manipulate photos in OI.Palette. Photos edited in OI.Palette are saved as new files.

1. Available with popular photo editing functions from the OM-D and PEN series such as Art Filter

Photos saved to your smartphone or tablet can be edited with popular functions from the OM-D series and PEN series such as Art Filter, Art Effects, Color Creator, and Highlight & Shadow Control.
Art Filter is a function that expands the possibilities of photographic expression. All 28 Art Filter options (including types), and 8 Art Effects such as Soft Focus effect and Pin-Hole effect can be combined for easy, creative photo expressions.
Color Creator can be used to control the hue and color saturation for more dramatic photos. This feature is completely different from traditional white balance adjustment, making it possible to intuitively manipulate the Color Ring shown on the screen by adjusting the hue (30 levels) and color saturation (8 levels, including base level).
Highlight & Shadow Control lets you adjust the brightness of light and shaded areas individually to give your image contrast. Although it was impossible to adjust highlight and shadow details using a traditional exposure compensation control, by dragging a tone-curve icon on the screen, these elements (highlights and shadows both -7 to +7 levels) can be easily adjusted.
Using all three of these features together makes for more impressive photos.

2. Includes functions with intuitive controls on smartphones and tablets such as adding handwritten signatures

A function with intuitive controls using the touch screen of smartphones and tablets is available. Not only can you add handwritten signatures, text, and logos, but you can adjust the tilt, rotate photos, change the aspect ratio, trim images, and make other fine adjustments.
Impressive photos created in OI.Palette can be directly uploaded to social networks from the app.

OI.Palette can be used in coordination with Olympus Image Share (OI.Share), an app used for importing images shot on Olympus cameras, and as a camera remote control. Select "Image Manipulation" in OI.Share to automatically launch OI.Palette and gain access to a various photo editing and manipulation options.