Compact, lightweight Macro Flash, STF-8The world's first*1 flash with a dustproof, splashproof and freezeproof design
for use in a wide array of shooting fields 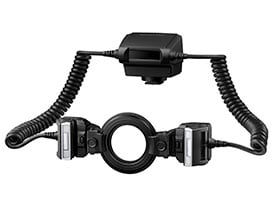 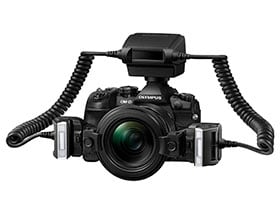 Olympus Corporation (President: Hiroyuki Sasa) is pleased to announce the Macro Flash STF-8, scheduled to go on sale in the end of December 2016. This compact, lightweight flash features the world's first*1 dustproof, splashproof and freezeproof (-10°C) performance. When combined with the dustproof and splashproof performance of the OM-D series and an M.Zuiko lens, this macro system is highly mobile in any shooting environment, whether indoors or outdoors.

*1 Among twin flash units, as of October 2016, according to Olympus research.

The Macro Flash STF-8 further expands the Olympus' strong macro shooting fields in this compact, lightweight, environmentally resistant twin flash.
Previous versions of twin flash units tended to be large and heavy. They also lacked dustproof and splashproof performance, making them impossible to use in certain environments. The Macro Flash STF-8 is specialized for macro shooting with its compact, lightweight body. It is also the world's first*1 to feature a dustproof, splashproof and freezeproof (-10°C) construction, making it perfect for shooting both indoors and outdoors.

The STF-8 features sealing technology cultivated on cameras and lenses to deliver the world's first dustproof, splashproof and freezeproof (-10°C) construction on a twin flash. When combined with the dustproof, splashproof and freezeproof (-10°C) performance of OM-D cameras and M.Zuiko lenses, you have a macro system that can shoot in any environment. You can shoot with confidence even in rain or morning dew-splashed outdoor scenes.
In addition to compatibility with three M.Zuiko lenses*2, third-party step-up/down rings can be attached to use a variety of lenses, including Four Thirds system macro lenses*3. The flash heads can be moved for versatile angles and shooting distances.

2. Flash output perfect for macro shooting with a guide number of 8.5 (when both heads are fired)

A guide number of 8.5 (when firing both heads) / 6 (when firing 1 head) was selected for the perfect flash output to match macro shooting. This makes it easier to avoid overexposure at the closest focusing distance for providing a high level of control over exposure. This design means that you no longer need to keep the flash heads far away from the subject or unnecessarily stop down the aperture.
In addition to high-precision TTL auto sync, the output can be fine-tuned for manual flash firing within 1/1 to 1/128 (control dial: 1 step increments, camera body: 1/3 step increments). Not only does this deliver fine control over exposure without being influenced by the shooting environment, but charging times can also be shortened by setting the appropriate flash output.

The left and right flash heads (A/B) are equipped with flexible functions for more fine control over lighting during macro shooting. Shadows can be controlled to emphasize depth of subjects, and accurately reflect your intentions for creative expressions.
The A/B output ratio (fire one head or adjust from 1:8 to 8:1) and manual flash output can be controlled with two dials on the control section. This design delivers intuitive, quick control over flash output.
The angle of the flash heads can be adjusted within a range of 60° upward to 40° downward, and can be slid along the ring adapter. Additionally, advanced lighting techniques are possible such as removing the flash heads for lighting backgrounds and lighting subjects from behind. The flash heads can also be attached to the hole on a tripod.
The dedicated retractable diffuser (bundled) controls the light from the flash to suppress the output and spread the illumination across the scene. This is effective for shooting extreme close-ups with an opened aperture and when shooting with a wide-angle lens.
The STF-8 is designed with the lens working distance in mind. Because the flash heads do not protrude beyond the end of the lens, they never hit the subject even when shooting extreme close-ups. The flash heads are also located near the optical axis for efficient lighting even when shooting very small subjects.

4. Supports various shooting techniques such as multi-flash and focus stacking

Remote firing from the front of the control section is compatible with the Olympus wireless RC flash system that communicates via infrared (commander only). The separately sold clip-on flash FL-900R and other large flashes for background light can be used for multi-unit lighting.
Features such as Olympus Focus Bracketing and Focus Stacking on the OM-D E-M1 Mark II (manual flash only) can be used to further expand expressions. Frame speed is controlled to coincide with charging time and firing priority during shooting. 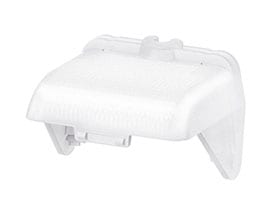 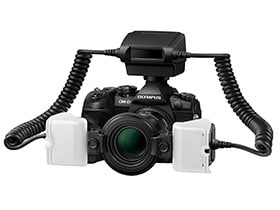