Olympus Corporation (Representative Director and President: Hiroyuki Sasa) today announced the global launch of the IPLEX G Lite industrial videoscope, beginning on May 23, 2018, a new product in its scientific solutions business that can be used to capture images inside aircraft engines, piping, and other equipment without the need for disassembly. The new videoscope will be exhibited at the Automotive Engineering Exposition 2018 in Yokohama, Japan from May 23 to May 25.

Industrial videoscopes are a type of nondestructive test instrument for inspecting the interior of confined spaces in equipment such as aircraft engines or piping at industrial plants. The tip of the videoscope is fitted with a very small camera and can be freely manipulated, making these instruments ideal for tasks such as periodic maintenance or inspecting a component’s quality. Through its IPLEX series of industrial videoscopes, Olympus supplies a range of models to meet diverse customer needs.

The new IPLEX G Lite videoscope is the successor to the compact and lightweight IPLEX UltraLite model. The design of the IPLEX G Lite videoscope retains the same small size and lightness, making it easy to use with one hand, while also featuring enhanced image processing and twice the brightness of its predecessor. Ease-of-use has also been improved by the adoption of a touch panel monitor and electrically operated scope tip bending, enabling users to complete inspections more quickly. New recording and playback functions have also been added, including constant video recording. Along with these performance features, the IPLEX G Lite videoscope complies with strict standards (including MIL-STD1 and IP65) to support its use for accurate and efficient inspection work, even under harsh conditions.

Recent years have seen an increasing emphasis on safety management and quality assurance in fields such as aerospace and architecture. This has also been accompanied by the use of industrial videoscopes for equipment inspection, not only in aircraft engines or piping at industrial plants but also wind power generation systems in the clean energy sector. A feature of these instruments is that they can be used to inspect such equipment without the need for disassembly. Along with high image quality and sophisticated functions, this inspection work also calls for instruments that are simple and intuitive to operate, are portable enough not to impede users, and have the durability to withstand use in harsh environments where they may be exposed to rain, dust, or machine oil.
The new IPLEX G Lite industrial videoscope has been designed specifically to satisfy these needs, with a particular emphasis on making the unit lightweight and portable. The IPLEX G Lite videoscope helps reduce user workloads by improving the efficiency of precision inspection work.

1. Enhanced ease of use with a touch screen monitor and electrically operated scope tipbending

The new model features electrically operated scope tip bending. As a result, the joystick isoperated with a light touch, making it easy for users to manipulate the scope tip as needed during inspections while putting less stress on the user’s fingers. This helps reduce fatigue when conducting inspections over an extended period. In addition, the touch panel monitor provides fast, intuitive menu operation and makes it simple to complete post-inspection work using the new image editing functions. 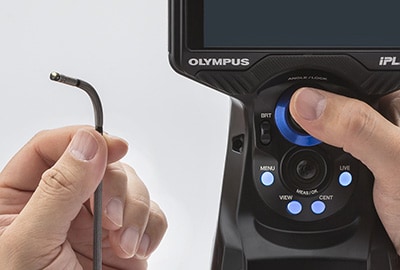 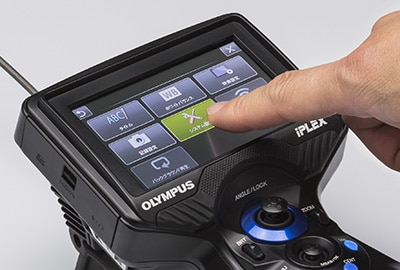 2. More efficient inspection work facilitated by improvements in image quality, with enhanced image processing and double the brightness of the IPLEX UltraLite videoscope

A newly developed LED light source features twice the brightness of the previous model. Thevideo capture rate has also been increased from 30 to 60 frames per second to provide smoother imaging. A new noise cancellation capability has been added to the image processing functions to help ensure clear images. Together, these features help shorten the inspection time and boost efficiency by enhancing image quality and making it easier to see into the corners of the equipment being inspected.

3. New recording and playback functions that include constant video recording of the previous 30 minutes of video

With the push of a button, take a still image while you're recording a video. This makes it simple to switch between video and still images when viewing a site of interest. Moreover, the newly added constant video recording function means that the last 30 minutes of video is always available for review, even if the user forgets to start recording or encounters an unexpected problem. An index function has also been added that enables the user to bookmark points of interest in recorded video. This makes it easy to go back to the desired section of the video, such as when preparing a report.

Olympus’s Scientific Solutions Business
Its main products are optical microscopes and industrial videoscopes and non-destructive testing equipment. Through these products, the Scientific Solutions Business helps to keep the infrastructure of society safe and secure, including research and development in the medical, life science, and industrial fields; quality improvement at production facilities; and inspections of aircraft and other large plant, etc.