Demand for pathology as a diagnostic tool has increased as new testing systems have made the early detection of cancer easier. However, in the face of this rising demand, many hospitals face a shortage of pathologists, leading to increasingly high workloads. One approach to streamlining workloads is using AI and a computer-assisted diagnostic tool to aid pathologists.

Since 2017, Olympus has participated in this joint research program called “A New Approach to Develop Computer-Aided Diagnosis Using AI for Gastric Biopsy Specimens” with Dr. Kiyomi Taniyama, President of the Kure Medical Center and Chugoku Cancer Center. This research paired Dr. Taniyama’s knowledge and experience of pathology diagnosis of the gastric system and digital pathology with Olympus’ imaging system technology and proficiency in AI development. Olympus, with its leading market share in microscopes, will continue to develop a CAD solution using AI for pathology diagnosis based on its proprietary deep learning technology.

Olympus used gastric biopsy specimens collected for diagnosis at the Kure Medical Center and Chugoku Cancer Center between 2015 and 2018 to develop deep learning technology, which consisted of a multiresolutional convolutional neural network1 (CNN). The deep learning technology’s unique CNN was developed by Olympus and is designed to analyze the features of pathology sample images. Using the CNN, the deep learning technology was used to identify the area of ADC tissues on images. Based on the result, images were classified into adenocarcinoma (ADC) and non-adenocarcinoma (NADC). The research involved two stages: the learning stage where the AI learns the CNN model using digital pathology images and associated information and the prediction stage where the AI classifies ADC images and NADC images using the model that it learned (Figure 1). 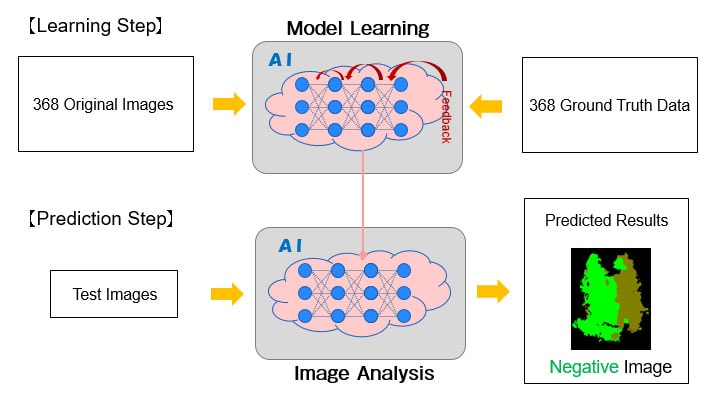 During the learning stage, the AI was trained using 368 whole slide pathology images2 and their associated data. In the prediction stage, test 1 was conducted to determine the threshold for assessing ADC in terms of the ADC probability output by the CNN on the assumption of actual clinical settings. In test 2, the threshold from test 1 was used to evaluate the results by classifying new sample images into either ADC and NADC categories.

Test 1 used the CNN to estimate the ADC probability for 786 sample images (297 of ADC and 489 of NADC) that were not used for learning. ADC tissue areas with a probability that exceeded the threshold were identified, and these results were used to classify images into ADC and NADC (Figure 2). After the threshold was adjusted, images were classified into ADC and NADC, and the sensitivity3 and specificity4 were calculated to generate a receiver operating characteristic (ROC) curve (Figure 3). 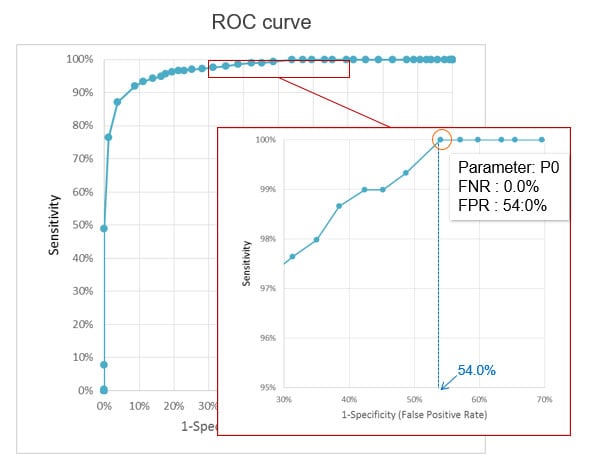 In addition to conventional morphological diagnosis using an H&E stain, molecular pathology and functional diagnosis have become increasingly important for determining a patient’s optimal cancer treatment plan, including which drugs will be most effective. According to the Ministry of Health, Labor, and Welfare, the number of pathological diagnoses in Japan increased by a factor of approximately 2.2 between 2005 and 2015; from 2,143,452 to 4,762,1886. The number of times immunostaining was used to help determine a patient’s cancer treatment plan also increased significantly by a factor of approximately 2.8, from 151,248 to 426,276. Meanwhile, a chronic shortage of pathologists persists, caused, in part, by an aging workforce. It was these factors that prompted Olympus to participate in the joint research program described above.

1 A network structure which is widely used in deep learning technology for image analysis. This structure realizes the learning features of input data effectively.

2 A technical method whereby pathological pathology specimens on glass slides are digitally imaged in their entirety and displayed for view on a monitor.

3 Ratio of positive being diagnosed positive

4 Ratio of negative being diagnosed negative

6 Source: The Statistics of Medical Care Activities in Public Health Insurance by Director-General for Statistics and Information Policy of the Ministry of Health, Labour and Welfare