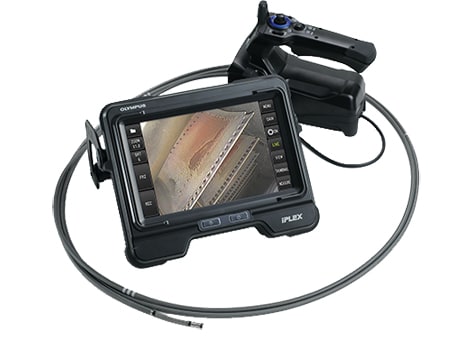 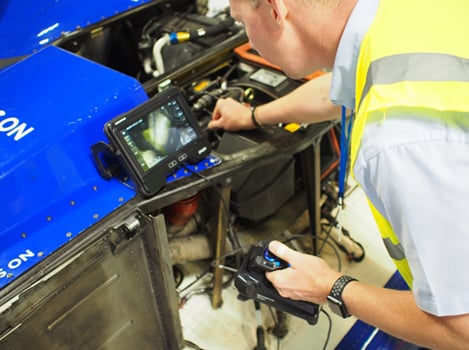 Industrial videoscopes are a type of nondestructive test instrument for inspecting the interior of confined spaces, such as power plant equipment or aircraft engines. As the tip of the videoscope is fitted with a very small camera with its own light source and can be freely manipulated, use of these instruments minimizes the amount of disassembly needed to inspect systems such as aircraft engines that have large numbers of components. They are widely used for tasks such as equipment maintenance or inspecting a component’s quality. Olympus has been supplying the IPLEX series of industrial videoscopes since 2000 to meet diverse customer needs.

The new IPLEX GX/GT videoscopes are intended for a wide range of markets. They feature a high level of imaging performance, with 30% higher brightness than previous models, distinctive image processing functions, and a faster frame rate. They are also suited to many different types of inspection as they can convert ultraviolet (UV) and infrared (IR) light in addition to using visible light. These videoscopes are also comfortable to hold, with fully electrical scope articulation and a controller that was designed with weight balance in mind. Another new feature is the touch panel, which can also be used for scope operation. On production lines where room to move is limited, inspections can be performed using the intuitive operation of the touch panel, without needing to take hold of the controller. Live streaming is also available using a wireless adaptor, allowing video showing the progress of an inspection to be viewed simultaneously on up to two display devices. IPLEX GX/GT videoscopes achieve this performance in compliance with strict standards, including IP65 and MIL-STD1, supporting accurate and efficient inspection even in harsh environments.

A newly developed LED light source unit features 30% higher brightness than the previous model. The video capture rate has also been increased from 30 to 60 frames per second to provide smoother imaging, while proprietary image processing functions deliver clearer images with less noise. Together, these features help shorten inspection times and boost efficiency by providing crisp imaging. Another feature that enables the videoscopes to be used in a wide range of different applications is the ability to swap the lighting units to allow IR and UV as well as visible-light imaging. IR can be used to inspect in the dark whereas UV is better at detecting fine cracks and showing the presence of lubricants that would risk going unnoticed using conventional imaging.

2. Easier for operators to use, with better controller weight balance and ability to use touch panel to operate the scope articulation

The weight balance of the controller has been optimized to minimize operator fatigue, resulting in a design that feels light but secure in the user’s hand. The new model also features fully electrical tip articulation of the insertion tube. The light-touch joystick operation enabling fine adjustments of the scope’s position helps ensure that the scope goes where the user wants it to. Being lighter to operate than previous models also puts less stress on the user’s fingers, helping to reduce fatigue when conducting inspections over an extended period. Another new function is the ability to operate the tip articulation using the touch panel. In situations such as on a production line, where room to move is limited, this provides intuitive operation directly on the monitor, without needing to take hold of the controller. 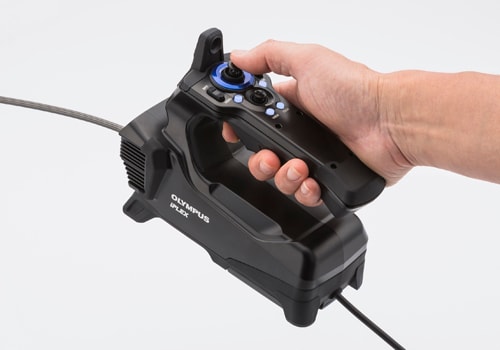 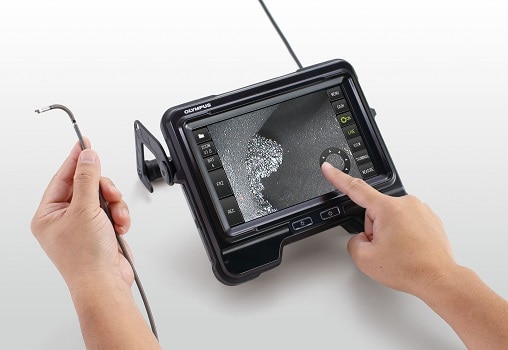 Live streaming is available using a wireless adaptor. This enables simultaneous remote viewing of the inspection video using the Olympus IPLEX Image Share App2 for iOS devices. Potential applications include use in training.

2 App available from the App Store 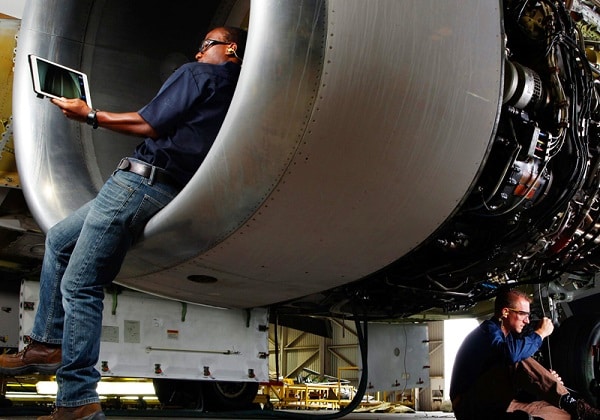