Specifications listed in a products catalog do not explain everything that users demand of surgical devices. For example, in the case of a surgical endoscope system, the device's total ease of use - including portability, setup, surgical performance, and takedown - also are key functions. When designing such products, one of the challenges is to solve potential problems that doctors and nurses might even not have been aware of. 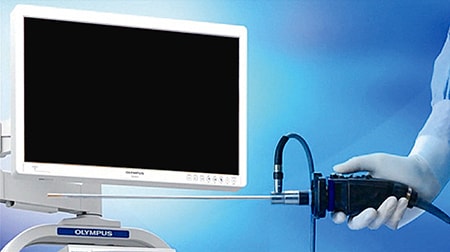 Endoscopes have been used increasingly in surgeries in recent years. It is now possible to use endoscopy for many surgical procedures conventionally performed with laparotomy, where the doctor makes a large incision in the abdomen and then performs the surgery while looking directly at the affected part. In the case of endoscopic surgery, however, a small hole is made in the abdomen, the endoscope is inserted and the surgery is performed while the doctor views a monitor.

Endoscopy has the significant merit of eliminating the need for a large incision, so the recovery time after surgery is faster and the patient can be rehabilitated back into society quickly. However, the procedure requires advanced technical skills and great concentration.
To alleviate burdens on doctors, Olympus is constantly developing and enhancing its products through the use of advanced technologies. A good example is three-dimensional (3D) endoscopes, which enable doctors easily to grasp conditions inside human bodies by simply viewing images on a monitor. It is anticipated that medical procedures such as resecting diseased parts and sealing blood vessels will become increasingly easy to implement thanks these devices. Moreover, 4K-compatible high-resolution systems are making it possible to observe diseased parts in greater detail than with conventional high-definition systems. In addition, infrared-equipped systems now allow blood vessels, blood flow, etc. to be observed with greater clarity than with the naked eye. 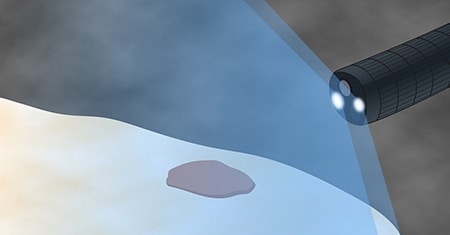 NBI observation performed with an endoscope

Olympus also is incorporating proprietary narrow-band imaging (NBI) technology, which uses a unique light for the vivid display of capillaries and their patterns. NBI is expected to contribute to the earlier diagnosis of cancer and other diseases.
Olympus is also driving the advancement of medical devices through innovative designing based on direct involvement from the initial stage of development, which ensures that Olympus designers understand how to satisfy doctors and nurses with exceptionally easy-to-use devices.

Consolidating Four Devices into One

The Olympus 3D endoscope system is a significant improvement over past products because it consolidates four devices into one. Previous 3D endoscopes had to be connected to a separate 3D video processor, a light source and two video system centers, but now these devices are consolidated in a single device (excluding 4K and IR systems).
The consolidated design makes it easier to transport the system around hospitals, conserves space in operating rooms, and allows personnel to move more efficiently during operations. However, creating the design was not simply a matter of consolidation components anyway possible; it had to be perfected with great thought and care regarding two areas in particular: the hardware and the graphical user interface (GUI). 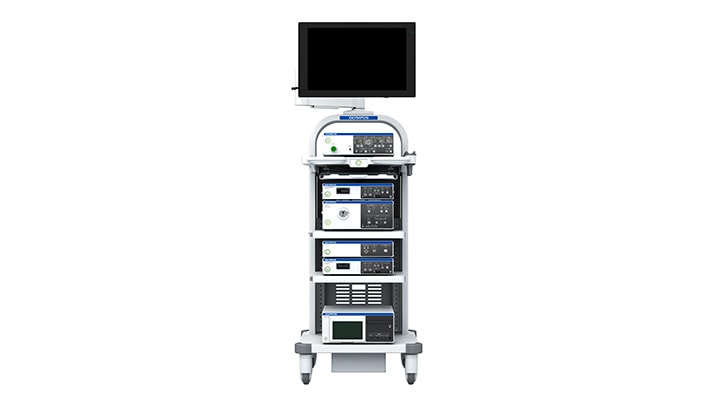 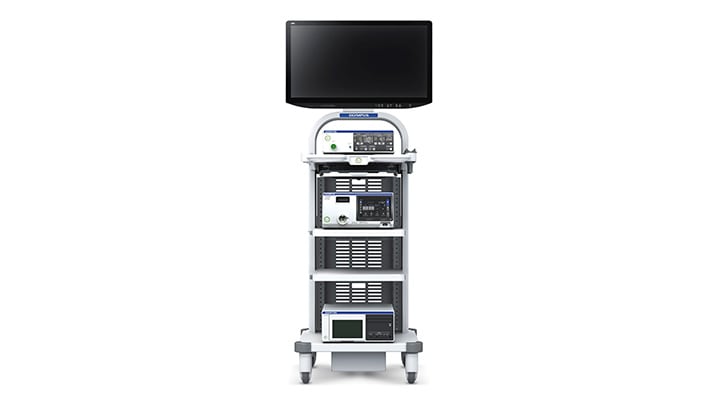 Surgical 3D endoscope system with four devices consolidated into one

Two key requirements for the new video system center were an easy-to-understand design and consistency with previous devices. To ensure that video and light cables attached to the device did not get in the way, the cable connections were arranged on the left side of the device and the operating panel was located on the right. The overall color scheme is basically white to project a clean, hygienic image, but the operating panel features contrasting dark and white tones for clear visual recognition.
The liquid crystal screen is angled for easy visibility and operation, affording unobstructed sight lines even when viewed from above. Ease of maintenance is also important, so the corners were rounded to enable nurses to wipe the device easily and efficiently for sterilization. A new approach was taken when considering the GUI's design. Conventional systems incorporate a keyboard and switches on the front to enable operations to be performed while viewing the screen, but the new system features a touch panel and more intuitive operability. Designing focused on addressing three key problems: misleading operations, erroneous operations, and physical and mental burdens on the operator. While these problems may seem obvious, goals and priorities can become obscured during the complicated process of product development, so the Olympus designers made sure the GUI stayed true to the core concepts of their new surgical endoscope.

Basically, the design process involved three steps prior to incorporating the GUI.
The first step was to examine the information structure. Since the GUI is based on a touch panel, the focus was the information structure and classification of functions, including the contents of the main and sub-screens. The designers gathered opinions about what to include on the main screen and what to prioritize even if it meant eliminating other information, based partly on how people used previous products. To visualize the information structure, buttons and a display area were drawn on a wire frame and then examined thoroughly. In fact, everything was examined with extreme care to avoid the difficulty of having to make unforeseen changes once the design had become rather fixed. 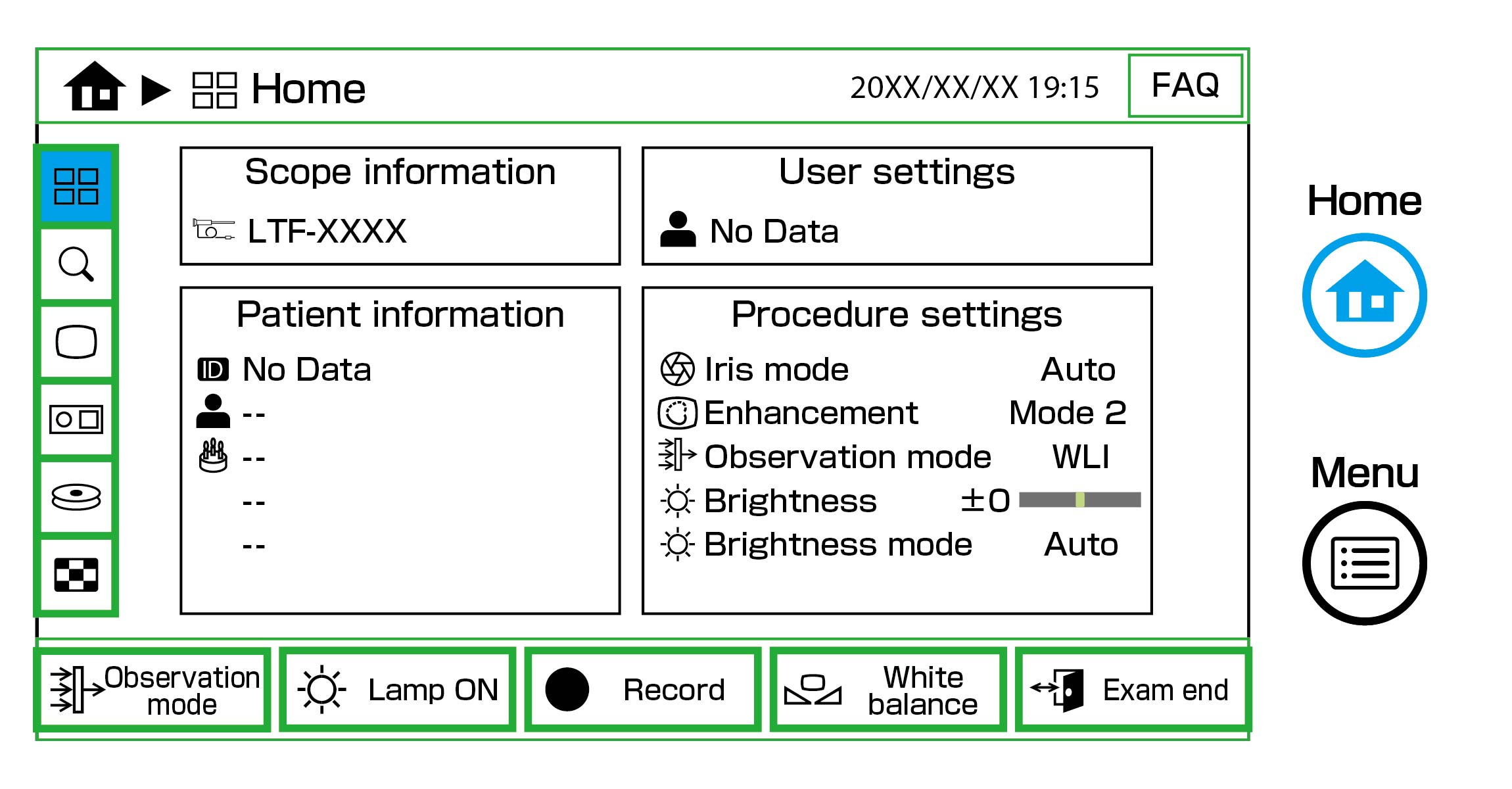 In the second step, a simulator was used to review screen transitions, button status changes and so on. The simulator was operated with a PC and operational flow was verified with a tablet PC. As the examination process moved ahead, the focus gradually shifted to specific graphic elements such as icons and text size.
In the third step, the GUI design was refined with the anticipated software in mind. The ability to reproduce the intended design accurately was confirmed and the color tones and detailed layout were refined.

Screens created with a simulator

Opinions adopted from around the world

Evaluations by external and well as internal personnel were another essential part of the design process. Beginning from the second step, various people were interviewed to gather broad opinions. Simulated surgeries were conducted, with members of the development team and other experts playing the roles of doctors and nurses. This process revealed new issues that had to be corrected, and then the process was repeated... again and again.
For example, it was noted that a person's finger could unintentionally contact the touch panel and change settings. As a result, precautionary steps were added to prevent erroneous operations, such as confirmation screens and requiring buttons to be pressed longer than usual. In the simulator-based evaluations, it was found that some users directly pressed on-screen text or numeral readouts rather than the buttons required to make changes. Accordingly, the GUI was designed to respond even if the user presses the text or numeral. Meanwhile, for the + and - buttons, some users tended to press the button edges, so the response areas were widened slightly beyond button edges.
The examination process even considered the needs of service engineers who perform maintenance on the devices, so Olympus engineers were thoroughly sounded out to ensure efficient, accurate maintenance.

Since the device would be used in many countries, its design had to incorporate culture-free icons and about 30 languages to ensure stress-free operation by users worldwide. Furthermore, only a fixed number of characters could be fit onto button faces, so the graphical needs of displaying multiple languages had to be considered. Reviews were conducted by doctors and nurses in diverse locations to eliminate any possibility of operational difficulty due to cultural background. 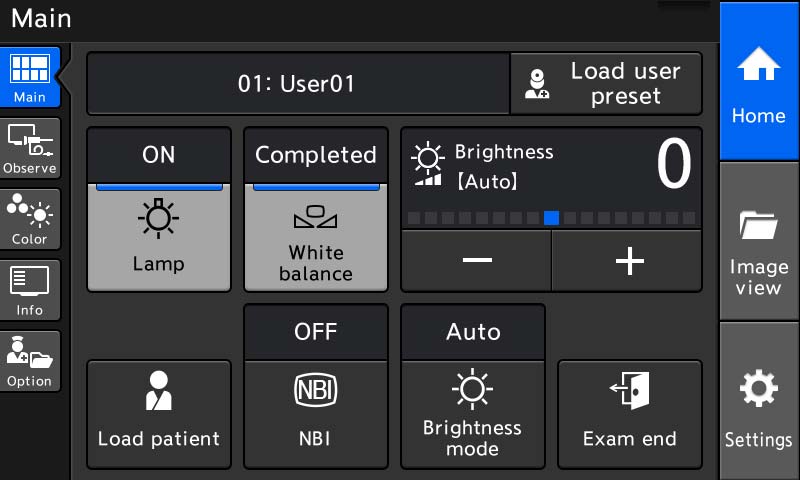 Designer Participation from the Start

At Olympus, designers participate in product development from the initial stage in hopes of creating extra-friendly designs. In order to uncover new problems as well as new possibilities, they continuously observe human behavior. Body postures are one of their special concerns. For example, it is not unusual for surgical personnel to have to raise their heads or twist their upper bodies to operate a device while viewing a monitor. This is so common that people often do not voice such dissatisfactions when surveyed. However, innovative designs can eliminate the need for awkward postures and thereby lighten the physical burdens of the surgical staff. From this perspective, it's easy to understand why Olympus designers jump at opportunities to attend surgeries and carefully observe surgical teams, hoping to enlighten themselves with new revelations.
Olympus is committed to designing easy-to-use medical devices that offer benefits in ways that even doctors or nurses hadn't expected or anticipated, confident that such devices can support early detection of medical problems and enable minimally invasive procedures for improved quality of life.