We decide to create a camera better than Leica, one that easily takes close-ups of flowers or pictures of documents.

The Leica that I was using before I joined Olympus was truly an excellent camera - it was almost perfect for snapshot photography. But there was a problem. These days when we want to copy documents we simply go to a convenience store, but back then the only way to make copies was to photograph documents. I needed to copy some material for my graduation thesis, and because I saw myself as an expert with the Leica, I tried using it to photograph the papers. It didn't work, because I didn't have an accessory that allowed me to take photographs at a distance of 30 to 40 centimeters.

So I borrowed an early Pentax SLR camera and used that to photograph my documents. There was nothing the Leica couldn't do, be it close-ups of flowers or copies of documents. But these tasks were extremely difficult. With an SLR it was simple. I thought that if I was going to get involved in development, this was the field for me.

However, Pentax SLRs were big and heavy, substantially bigger and heavier than the Leica. The designers had worked hard to reduce the size, but still they were bigger than the Leica. For someone like me who always carries a camera around, this was a real nuisance.

The advancement of the SLR was the culmination of development efforts by Japanese camera manufacturers.

If you wanted a normal SLR, you could go and buy it. But what was missing? 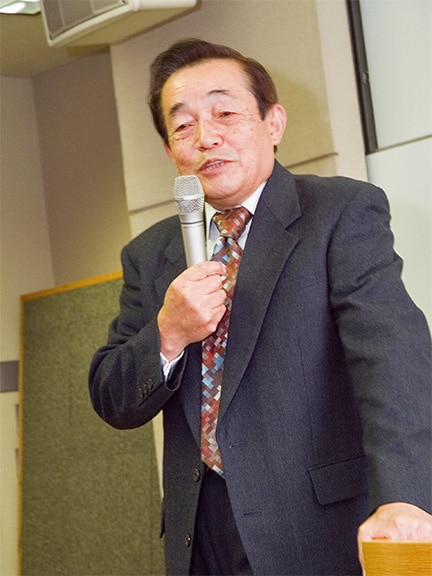 The first SLR camera, the Exakta, was developed in Germany. Zeiss created the original SLR by installing a pentaprism in a Contax-S camera. Though the SLR was born in Germany, however, the efforts of Japanese manufacturers played a major role in its subsequent development. Pentax produced a device called a “quick return mirror.” In early SLRs, once the shutter had been released, the mirror stayed up and you couldn't see anything. It was totally dark. The quick return mirror was the result of much effort, and it was extremely popular.

The development of the modern SLR was the culmination of efforts by Japanese manufacturers. The SLR emerged as a superb camera for the non-half-size market: it could take close-up and long-distance shots, and it had many advantages. In one sense we aspired to make SLRs, yet I didn't want to make something that you could already buy in a store. I had my philosophy. What should I do? I researched the problem, and I thought about it from the perspective of my own experience.

Ultimately, I realized that the real reason why I couldn't get enthusiastic about conventional SLRs was the problem of their weight and size. This is a major difference of 35mm cameras compared with the Leica. The half-size camera that I made was also the result of my efforts to create a smaller camera.

A true system SLR should be compact and have impact.

Olympus started out as a microscope manufacturer but grew into an integrated developer and manufacturer of optical instruments, including cameras and endoscopes. 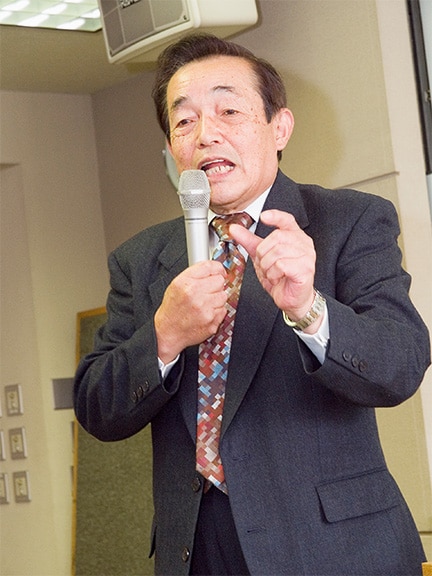 As I said in the previous session, Olympus was the first Japanese company to exhibit at the Photokina show in Germany. Photokina is a huge event and it was expensive to exhibit there, costing more than the sales division was permitted to approve; board approval was required. Once Olympus had decided to exhibit, it also wanted to display its microscopes and endoscopes, but Photokina is a camera show, and in those days they wouldn't accept products other than cameras.

The person responsible was extremely worried by pressure from executives in other divisions. When I heard about this situation I had only just joined Olympus, but I resolved in my heart that one day I would create something that would allow Olympus to show all of its products. So when I began to develop an SLR I thought I could provide an image recording solution, as I had resolved to make a camera that would give Olympus the opportunity to display all of its products, including endoscopes and microscopes. In short, I was going to create a full-featured system SLR.

An SLR camera can photograph anything. However, an endoscope produces a round image, while the finder in a camera is square. The light will not go through a normal finder, and you need to replace the finder screen. I realized that if I was going to develop an entire system, I would need to change the finder screen.

I also had to reduce the size. However, my ideas were not accepted without a struggle. Japan had entered its high-growth era and Japanese companies were growing dramatically. Technology was being used to create new functions, and this led to the introduction of new products. Companies wanted their products to be heavier, taller, longer and bigger, and it was a time of growth in shipbuilding and steel. My idea was to make something smaller, and if we couldn't do that, we should simply buy products from other manufacturers. Yet from a sales viewpoint, there would be problems if the camera was simply smaller without providing anything new.

They told me that something that was just small would have no impact and would not be viable as a commercial product. It took the whole of 1967, from January to December, before they finally understood my concept. At a planning meeting in December, my superior, Mr. Sakurai, said that it was time to go ahead with my idea of creating a smaller camera. It had taken a year to break through the barrier of accepted wisdom. We had finally reached a decision, albeit through coercion.

next:
To create products that will capture the hearts and minds of users, you first need to break through the technology barrier.

back:
We had created the Pen FT, the world's first half-size TTL SLR camera, but...