After breaking through the technology barrier, you run into the barrier of accepted wisdom.

Leica's new M3 had a film advance mechanism operated by a lever instead of a knob. The frame counter would automatically revert to zero when you opened the cover. Today this seems obvious, but back then the mechanism was leading-edge. The rewind mechanism was also lever-operated. In fact the M3 was packed with new technology, including a bright frame range finder with a range that changed according to the lens you were using. Other camera manufacturers were desperately trying to catch up with the Leica M3. 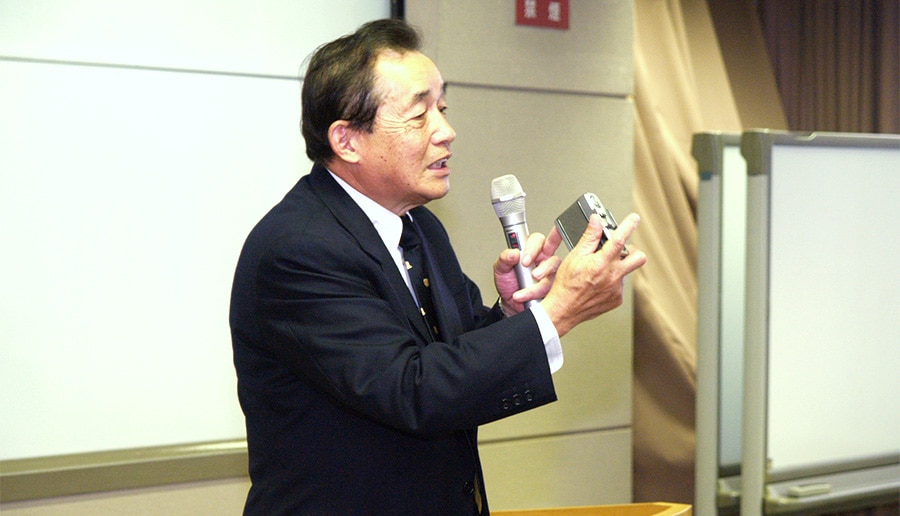 Human ingenuity is truly amazing. Olympus was also trying to improve its film advance mechanism. However, switching to a lever mechanism would have required replacing about 40 components. We couldn't afford the expense, so we opted for a rear-winding film advance system that had a similar feel to Leica's lever system. Our system consisted of a single plastic dial. One solution would require 50 changes, the other just one. And because the part was made of plastic, it was cheap. We abandoned the idea of a frame counter that would automatically revert to zero when the cover was opened.

During my training in the factory, I learned that frame counter mechanisms are quite complex. Sometimes they would wind forward two frames instead of one, while other times the film did not advance at all. The mechanism contained about 30 parts, and there were checks at each of the 36 manufacturing stages. Over and over again, Olympus invested huge amounts of money. There was a 36-tooth gear wheel, and above that a 35-tooth pressed gear wheel. These went round one tooth at a time, and because one wheel had 36 teeth and the other 35, there was a one-unit discrepancy. With pressed gears, you don't need to exert a lot of force. The cost is only 2 yen or thereabouts, and no testing is needed, since there can be no errors once the teeth have been processed. Anyway, because we had spent so much on the lens, we had to apply a lot of ingenuity to the other parts.

The Pen was gradually taking shape, but as we moved closer to our initial goal of creating a cheap camera, we encountered two barriers. The first was the technology barrier, the same barrier I hit when I wanted to photograph something but couldn't find a suitable camera. If something doesn't exist, there must be a reason. Perhaps it would be extremely expensive or technically impossible. Or maybe it couldn't be made sufficiently compact. If you want to meet these challenges, you have to break through the technology barrier. That's the first barrier.

I'm happy to report that we were somehow able to break through the technology barrier. Because I was a new designer working on a research problem, nobody complained, and I was able to design according to my ideas. Eventually I built a prototype. When Mr. Sakurai saw it, he immediately said "Let's manufacture it." It's very unusual to look at the result of a new employee's training project and decide there and then to manufacture it. But Olympus has a culture in which people are able to act boldly. This same spirit of creativity allowed us to create cameras that could take photographs inside people's stomachs. That's why I like Olympus. You can be free of that endless process of debate about whether something will sell and how much it will cost.

So my prototype was about to go into production, and I was excited. But even though the decision to produce my camera had come from the very top, the factory manager refused to manufacture my "toy camera." Half-size cameras didn't exist then, and sales executives told us that my camera wouldn't sell because there was no market for it. This was the second barrier. Accepted wisdom told us that the camera couldn't be made and wouldn't sell. Since our factory wouldn't make it, we decided to outsource production. That was how the Pen first came into being. And as soon as it went on sale, it became a best-seller.

The Olympus Pen goes onto the market, and I see one in use

In those days camera manufacturers measured their output in hundreds of units per month, with the average being 200 or 300. Olympus had a hit product called the Olympus Wide, and we were wondering if production would hit 1,000 units per month. Once we got past the 1,000 mark, we could use conveyor belts.

I was allowed to attend and speak at the planning meeting held when the Olympus Pen went into production. Someone asked me how many I expected to sell. Statistics had just been published showing that there were 7 million cameras in all of Japan, including those tucked away in the bottoms of drawers. I thought that half the number, say 3 million, would be replaced by half-sized cameras, and that Olympus could capture half of that market, so I replied that we could sell 1.5 million units. Everyone was astonished and laughed out loud. Eventually we decided on a monthly production figure of 5,000, which was unprecedented. But the Pen sold so quickly that production couldn't keep up with demand, and soon sales staff were demanding to know when we could send more stock.

When we developed the Pen S, we priced it at 7,000 yen. The factory manager who had refused to produce the Pen now begged to be allowed to make this camera. I felt that I had at last earned recognition within the company, and that I had finally broken through the barrier of accepted wisdom. This was due in part to the support of my superiors, who were able to see beyond the barrier, but another factor was the support of the countless users who bought the camera after it was released.

In those days, almost all camera buyers were men: men accounted for about 98% of the market, and women around 2%. Men like machines. They dream of Harley-Davidsons. That's why we made cameras with so many controls. The accepted wisdom was that real cameras had to have lots of controls.

However, a month after Olympus launched the Pen, I happened to see a mother photographing her little boy while I was on my way to work. She was using a Pen. I was so excited to see someone using the camera that I'd designed. But after I watched her for a few seconds I started to worry. I wanted to warn her that the picture would be out of focus with those settings.

It was then that I decided to design a camera that a woman like that would use. There would be no difficult controls. It would be so simple that the user would just have to push a single button. Yet this concept was the exact opposite of the cameras that were selling well on the market. The sales staff told me that it wouldn't be a proper camera, and I later heard that a conference of branch managers had also concluded that my design would not be a real camera. The head of the sales division came to see me in person and tried to persuade me to abandon the idea. I'd only been with Olympus for about three years, and it was only a year since I'd returned to the design department after my training in the factory. I was just a youngster. And yet this executive came to see me. He sat down with me and begged me to give up my idea. I impudently countered each of his arguments, and we continued to argue from morning until the end of the day. However, a junior employee cannot expect to win an argument with a division chief.

I realized that the barrier of accepted wisdom was about to prevent my idea from becoming reality, so I asked him to wait until the next day, when the prototype would be ready. I worked all through that night, and the next day I showed him the camera. He played with it in silence for about 30 minutes. Finally he looked at me and said, "Maitani, let's do it!" As the proverb says, a wise man will change his opinion, a fool never. I was filled with admiration, and wondered if I would have been able to change my mind like that if our roles had been reversed. It's not easy. And so we decided to manufacture the new camera.

The Pen was a huge best-seller, and was a major hit with women.

At the final planning session, I proposed a price of 8,000 yen. The sales people said that the price should be 10,000 yen. I had been involved in the design of many cameras, but never before had the sales people wanted to set the price higher than the figure suggested by the developers. That rarely happens. Ultimately the new camera went on sale at 10,000 yen, and it became a huge best-seller.

Once we had broken through the barrier of accepted wisdom and created the product, it immediately became a best-seller. Half the people in the world are women, and I'm sure that even some of the younger people here have seen Pen cameras in their homes. According to the data, the percentage of female buyers jumped from 2 percent to 33 percent after the launch of the Pen EE.

This Camera Museum was originally founded as the Japan Camera and Optical Instruments Inspection and Testing Institute (JCII). A JCII official repeatedly told us that our new product was not a real camera, and that we should abandon the project! You might think that it's been plain sailing for me, but I've always been an unpopular member of the Olympus organization!

Companies, married couples, parents and children experience a variety of changes in their lives. It's our philosophy and passion that carry us through these changes. Whenever we try to do something new, we invariably encounter the barriers of technology and the accepted wisdom. The Pen camera resulted from our efforts to break through these barriers. I was lucky when we were developing the Pen series. I was lucky to have superiors who could see beyond the barriers, and even more lucky to have the support of users. It was this good fortune that propelled me through the second barrier.

Initially there were no plans to create a series of cameras. We just focused on developing a single model that would emulate some of the characteristics of the Leica. I never spoke about developing a series, but I was thinking about it. I also thought that the Pen would never become popular unless we developed it as a series. Ideally all of the products in a series should be launched at the same time, but this was not possible because I was doing all of the design work. When a new model is launched, the old model usually disappears. With the Pen, even when we brought out new models, the old models never went away. Each model had its own role as part of the series. Other manufacturers rushed to create their own series of half-size cameras - that was the great half-size boom.

However, manufacturers thought that users would want a 35mm, an SLR, as their main camera, and half-size cameras were seen as sub-cameras. At first I never thought of making a half-size SLR camera, but after the boom began, users began to demand half-size SLRs.

next:
I began to develop a new shutter in response to the market demand for a half-size SLR camera.

back:
I was a wastrel son, and I never expected my photographic hobby to become a career in cameras.