I began to develop a new shutter in response to the market demand for a half-size SLR camera.

In the mid-1950s, there was no television in the house where I lived, and so I used to spend my evenings reading novels. In those quiet moments, I began to reflect on the half-size boom, and to wonder if people would want a half-size SLR camera. 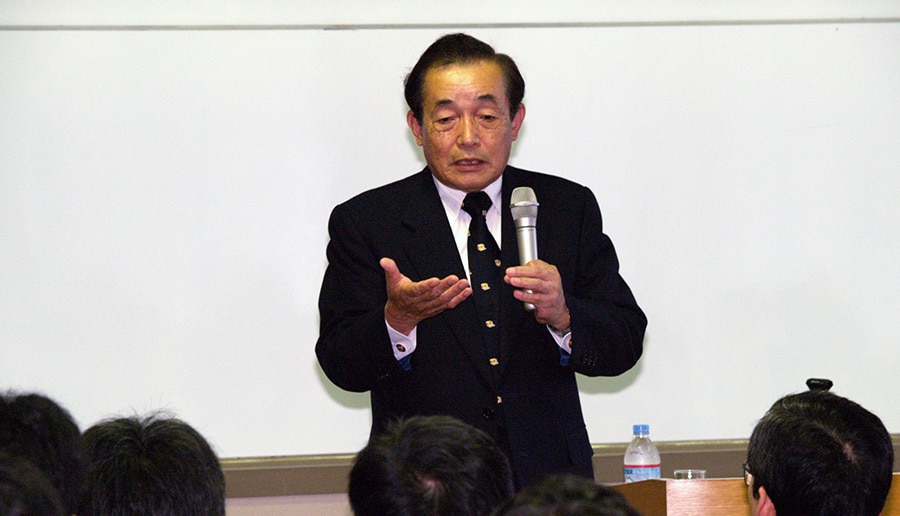 It wasn't simply a matter of halving the design of a normal 35mm camera. A 35mm camera is wide. The mirror swings up around its long axis, so it's the short side that rises. Of course, it would be disastrous if the mirror hit the lens. Today, retrofocus lenses are commonplace. With a half-size camera, everything is cut in half, so the mirror has to rotate around its short axis. This means that there is greater risk that the mirror will hit the lens. We couldn't allow the long side of the mirror to swivel up, so we created the first SLR camera with a mirror that swiveled sideways. But this created a new problem, since light going to the side no longer reached the eye. While I was thinking about this at home, I came up with the idea of directing the sideways light upwards.

Anyway, I thought that if I could develop a focal plane shutter, I could create an SLR camera, even though it would be longer horizontally. I assembled the ideas I had developed to break through the technology barrier and took them into my office, where I put them in my desk drawer. We were still extremely busy with the design and manufacture of the Pen.

Some time after the Pen became a major hit, Mr. Sakurai, the head of design, told me that people were asking for an SLR camera and asked me for my thoughts. I took the drawings that I had produced while working on the Pen out of my drawer and immediately showed them to my manager. At first he was surprised, because the camera was a different shape from a conventional SLR. I explained each of the features to him, and eventually he told me to go ahead.

It occurred to me then that if you wait until someone gives you an order to start work on a project, you lose around half a year. But if you exercise your mind all the time when you're busy, ideas will come into your head, and they will lead you to something new.

Developing the Pen F - the only half-size SLR camera

With the Pen selling so well, I no longer faced the barrier of accepted wisdom in my work. Instead I was told to make new cameras more quickly. However, the technology barrier was still there. I couldn't handle the design work alone any more, and for the first time I was given an assistant. My assistant was the leading theoretician in the development department, and he said that he wanted to begin by making a rotary shutter. What he created had all the basic characteristics of a rotary shutter, which consists of a rotating disk. It looked great, and I decided to leave the project to my junior colleague. Unfortunately it did not go as planned: each rotation took about one-fiftieth of a second. We tried in vain to make it go faster, for an SLR camera with a top shutter speed of one-sixtieth of a second was unthinkable.

We concluded that the only way to increase the speed of the shutter was to reduce the weight. Apertures and shutters are made of thin steel sheet. The steel is about six hundredths of a millimeter thick, which makes it too heavy to rotate any faster, so we tried using aluminum, which is lighter than steel. We found that the connection between the shaft and the vanes was not durable enough, so we increased the number of fasteners. Once we had securely fastened the vanes at one end, they started to break at the other end. The shutter would rotate, but the sudden force applied when it stopped caused a massive shock. The aluminum sheet crumpled like a fan. This was hopeless, so we decided to look for other light materials. The next substance that we tried was titanium, which was being used by NASA. Titanium was very rare at that time, and the purchasing department desperately searched for a source. Eventually they found a supplier somewhere in Yokosuka. We only needed a minute quantity for our prototype, but the supplier refused to sell the titanium piecemeal, and so we were forced to buy an entire roll. It was extremely expensive, but fortunately we were able to use it later, otherwise we would have incurred a huge loss.

By using titanium, we were able to increase the speed to one three-hundredth of a second. But it still wasn't fast enough, so we made the titanium even thinner, but it crumpled like a fan. Then we remembered a technology used in microscope manufacturing, whereby the glass is etched away in the center leaving it thick at the circumference. When we etched the titanium in the same way, we were able to increase the speed almost to one five-hundredth of a second. But even this was not fast enough. The only solution now was to strengthen the spring. That enabled us to achieve a speed of one five-hundredth of a second initially, but the spring would break after a few repetitions. When we examined the affected parts under a microscope, we saw that even though the spring was made of ordinary steel, it looked like a rough piece of rope that had been pulled apart. It was metal fatigue.

Eventually we solved the problem by using a special spring made of Swedish steel. We had reached the 500 mark, but we still had to find a way to accommodate slower speeds. Today we can do this with computers, but back then we had to use mechanical gears. The shutter membrane must be held in the fully open position, which puts the gears under a tremendous strain. They told me that the mechanism just stopped. In fact the gears had been totally stripped; half the teeth had been broken off. We overcame each of these problems in turn, and eventually we were somehow able to build our focal plane shutter.

And that is how we developed the Pen F. We had created the world's first and only SLR camera. Unfortunately it was a huge failure. Because we took all the patents, no other company could manufacture this type of camera, and there was no boom.

This completes the first half of my presentation. I thought that I was challenging the two barriers with my own vision, but in fact I was simply working within the Olympus color.

back:
After breaking through the technology barrier, you run into the barrier of accepted wisdom.