The compact, lightweight OM-1 brings relief to the shoulders of photographers everywhere.

Mr. Sakurai, who was my manager when I was designing the Pen, was now head of the sales division. I heard later that the head of the development department had telephoned Mr. Sakurai and suggested that if the production people were having so much difficulty, perhaps we should give them a little more leeway on the dimensions. Apparently Mr. Sakurai agreed. I was summoned to see the person we knew as the godfather of development, and I spent two hours arguing vehemently about the need to make the camera smaller and lighter. I was convinced that that was what he wanted to hear. So the head of development telephoned Mr. Sakurai again and told him that the dimensions couldn't be changed after all!

This sequence of events seems to have started when the head of production in the factory reported that it would be extremely difficult to reduce the weight to 700 grams, which was about half the weight of a Nikon SLR, and asked if a compromise might be possible. After all, this was an SLR. By the time you add exchangeable lenses and all the system components, the photographer's bag would weigh six or seven kilograms. Photographers carry several cameras, which is no problem if you're in a car, but it's a lot of weight to hang from your shoulder. So we needed to halve not only the weight of the camera, but also the weight of all the system components. Then the bag would weigh three kilograms instead of six. That's a big difference. We wanted to reduce the size and weight of the body, and our target was a 600 gram body.

Once we booked a hotel in the French countryside as the venue for a party to show our appreciation to photographers. The hotel was on the C坦te d'Azur on the Mediterranean coast. We invited photographers from around the world as a way of showing our appreciation. The only invited guest who didn't attend was Don McCullin, a famous news photographer.

You've probably heard of Robert Capa. Well, Don McCullin followed in his footsteps and has gained such a reputation that an exhibition of 200 20th century photographs would need to include at least a dozen by him. On the evening of the first day of the party, he telephoned to apologize. He said he would be unable to make it that day because he had been stranded at Heathrow Airport because of a strike.

The next day he telephoned again. When we asked him where he was, he said he was telephoning from his home in London. He had made it as far as Paris but had been unable to buy a ticket to the C坦te d'Azur because all the planes were full. He had considered staying in Paris but was unable to find a room and had been forced to return home. On the evening of the third day, we all returned exhausted from a day's cruising to see Don McCullin arriving at the hotel. We told him that only one day remained, but he said he didn't care about that because there was something that he wanted to tell us.

He told us that he had been able to capture his amazing battlefield photographs in Vietnam and various other war zones because his camera was light. He wanted to thank us for that. My eyes filled with tears when he told us that the OM SLRs had lifted a weight from the shoulders of photographers everywhere. He really understood the significance of our efforts to create compact, lightweight cameras. That was a wonderful moment.

It was around this time that I started to design the OM2.

My philosophy was the source of my enthusiasm for development.

When I started to work on the OM, the world was already moving toward electronic shutters. Because Olympus was mainly producing Pen cameras, it had fallen behind in the development of SLRs.

I spoke earlier about the relocation of capital city functions to underutilized areas. At that time electronic shutter technology was still in its infancy, and there was a large electromagnet in the city center. Of course, this was the result of huge efforts, and I admire that hard work. However, it would have been easier to relocate functions to underutilized areas. With the OM-1 and OM-2, we all had this idea from the outset.

To understand what an electronic shutter does, let us imagine that we have a bucket here. The shutter opens, and light pours in and accumulates in the bucket. When the bucket is full, the shutter closes. The bucket is a capacitor, which converts light into electricity and stores it while the shutter is open. SLRs also collect light, but they can't pour into a bucket because the mirror flips up, causing everything to go dark. Really the shutter should remain open while light is being collected, but no light reaches the finder, which remains dark. So the amount of brightness before it goes dark is stored in the bucket, which is emptied after it becomes dark. This is known as a memory formula. You store the light before looking through the finder. The amount of energy is calculated, and the result is used to close the shutter. Pentax was the first to develop this system. 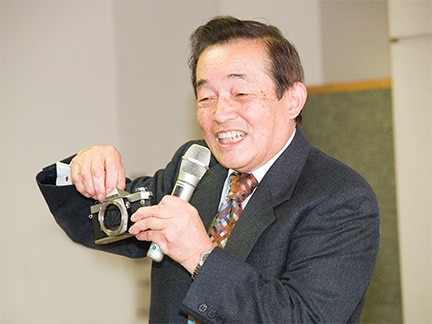 I thought that we could create an ideal electronic shutter by placing the bucket in a location that would be exposed to light when the mirror was raised for shooting. The brightness before the stored memory formula changed would be measured. This is easy to understand if you think about a strobe. Light is produced only in the instant in which the image is recorded, so you can't use a memory formula that measures the brightness before shooting. I wondered if there were any SLRs that could measure brightness even in strobe light, and I found that there were none on the market, so I decided to make one.

Where does the light go after the mirror is raised? It hits the film. I was trying to collect the light that hits the film directly into the bucket. It seems obvious now. If you use the light that is hitting the film, that's direct photometry. However, I was told that I would need to adjust all of the light hitting the film because film comes in various colors. So I collected film from around the world, and after examining perhaps 50 different types I realized that film is indeed produced in a wide variety of colors. However, when I measured the reflected light, the variation was only 0.1EV, which gave me confidence that we could succeed.

The opportunity to create a camera that was not available on the market was perfectly in tune with my philosophy. With direct photometry it was possible to measure even strobe light, and you can be as close to the subject as you like. With autofocus systems, you can't take close-up shots at 30 centimeters. The new system worked fine at 30 centimeters and even 10 centimeters. When we announced it at Photokina, there were around 300 journalists from around the world at the venue.

Before I went up to speak, there were about a dozen strobes lined up, and shutters were clicking. The strobes on both sides all flashed at the same time. The resulting images were clear all the way to the far background. This would have seemed impossible in those days, and everyone was impressed.

So I was always making odd cameras. This must have made life difficult for the sales people. When you're selling something that didn't previously exist, you need to start promoting it from scratch. Your message will reach some people and miss others. Some people will just say, "It's small. So what?"

I'm sure that the design staffs were annoyed by my unreasonable demand to reduce the size and weight by half. But repetitions of this process eventually led to the creation of something that photographers want, something that I wanted. If something is not available to buy, you have to make it yourself. If your way is obstructed by the technology barrier and the barrier of accepted wisdom, you have to find ways to break through those barriers. I believe that our efforts to do this have brought Olympus to the present stage in its history.

While I was developing the OM, others were worried about the future of 35mm compact cameras.

I would now like to talk about the XA. We launched the OM-1 in 1972 and the OM-2 in 1975. A product that was not previously available on the market can be seen as innovative, and in some senses it might be regarded as odd. The creation of a new product involves considerable effort by a wide range of people. The backbone users are not the ones who opt for a particular brand, but rather the people who choose a product because they really understand its characteristics.

It's because of those people that our cameras continue to command high prices, even though they have become classics. Someone once asked me why the prices have stayed high even though the products are now classic cameras. I have never designed a classic camera! With the benefit of hindsight, all I can say is that the cameras turned out well.

When we introduced the OM-2, a new manager was appointed to lead the Marketing and Planning Division. The new manager had started out working with microscopes. He was an expert on statistics and would carefully follow trends in numerical data.

The Pen was selling well, and Olympus had a market share of over 60% for half-size cameras and 36-37% for 35mm compact cameras. That's why we were able to introduce the OM. Because the entire company was focused on developing SLRs, we couldn't introduce many new products, and our market share had fallen from 36-37% to around 35%. Normally a change on this scale would not be noticed, but that manager decided that we needed to do something about the trend. He told me that I should develop something. He had previously worked in development, and we were chatting about those times one day when he said that he knew I was busy with SLRs and asked if it would be acceptable for the sales people to plan a new product.

It is normal for Marketing people to plan new products, and I was indeed very busy, so I told him to go ahead. So the Marketing and Planning Division manager issued a directive to sales offices in Japan and overseas. It said that there was a crisis in the 35mm compact camera segment, and that our market share was in danger of slipping below 35%. The directive said that Olympus needed everyone to help plan a new product. About two weeks later I received a telephone call from the manager of the Osaka Branch. He told me that they had all discussed the problem but had been unable to come up with any ideas. "You're our only hope," he said. "Haven't you got any ideas?" There was a similar call from the Tokyo Branch around the same time. I knew the inside story, and so tongue in cheek I told him that I was too busy to help, and that they should carry on by themselves. A month later I was summoned by the Marketing and Planning Division manager It seems that they had all struggled to produce ideas but they were stuck. "Can't you help us?" he asked.

next:
Sifting through 100 ideas while breaking through the barrier of accepted wisdom

back:
To create products that will capture the hearts and minds of users, you first need to break through the technology barrier.