At Olympus, we are continuously turning out a steady stream of attractive, new and innovative cameras with compact and lightweight designs. Behind this success are the original technologies that have catapulted Olympus cameras far ahead of competing products. Yet almost every step of the way, Olympus has faced obstacles in our quest to create new technologies.

Only by overcoming these obstacles can we turn "innovative ideas" and "dreams" into reality. Olympus excels because of our corporate heritage that has continued to inspire creativity in generation after generation of engineers.

The "Olympus Pen" triggered a boom in half-size cameras that lasted from the 1960s into the 1970s. Olympus half-size cameras set the pace for compactness and design quality and offered a range of innovative features, including simple rear-winding mechanisms and D-Zuiko lenses. But we didn't stop there. After our groundbreaking success with the "Pen" Series, Olympus went on to create the legendary "Pen F" Series half-size SLR camera system. These superb cameras embodied numerous highly original technical advances that were made possible only through the creativity of Olympus engineers and their steadfast determination to overcome every technological challenge. 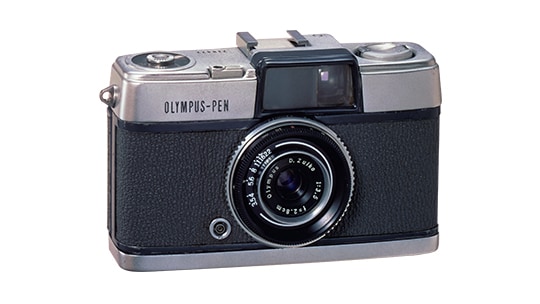 The Olympus Pen (1959)
The original Olympus Pen-compact, lightweight, and a half-size format. The Olympus Pen Series, which later included the Pen EE and PEN D, was a major hit with a track record of over 17 million units sold.

The Olympus Pen F (1963)
The Olympus Pen F, the world's first half-size system SLR and also the first camera to have a titanium shutter. The product of major efforts by Olympus engineers, this innovation combined speed with durability.

In the late 1960s, when full-featured SLR cameras were in vogue, Olympus was developing something totally new. SLR cameras had three major problems-they were big, they were heavy, and they produced substantial noise and vibration. Olympus designers, engineers and technicians boldly accepted the challenge of creating some-thing better. Their uncompromising commitment led to the development of the OM System, a unique 35mm SLR camera system.

Olympus engineers and technicians met the challenge to overcome the three major problems of SLR cameras head-on, and their uncompromising efforts led to the development of the OM system. Impressed with the extremely compact and elegant form of the mock-up that compressed all of the required features, the engineers' hearts were set on realizing this challenge.

The Challenge for Production Engineers-Balancing Cost against Design Innovation

Olympus came up with an epoch-making design for a compact, lightweight camera, and we also had the production technology needed to turn that design into reality. Structural components would be made as small and light-weight as possible, but at the same time there would also be dramatic improvements in strength and durability. Every reduction in weight was backed by articulate calculations of strength. Brass, which had been the traditional material, was replaced with lightweight aluminum, or by steel, which is strong but light... The light condenser was integrated into a pentaprism with a curved lower surface. Other innovations included replacing the shutter ribbon with a string, and using a miniaturized focal plane shutter with a built-in shutter brake. An air damper was added to the mirror drive to reduce the vibration caused by mirror motion.

These design innovations were the fruits of the parallel efforts of engineers working on hundreds of experimental production technologies. Their challenge was to keep costs down while also ensuring that the camera would be easy to manufacture. Following the decision to use steel materials, Olympus engineers developed rust-prevention and heat treatment technologies. Other research themes included the search for a dry lubrication method that would not require grease, and processing technology for the totally new concept of a pentaprism with a curved lower surface. The engineers also developed an ultra-precise processing method for the air damper. The resulting design was a reflection of their cumulative successes in creating innovative technologies to reduce the size and weight, including a new assembly for attaching the string to the shutter membrane.

Engineers Determined to Exploit Every Last Iota of Potential

Our engineering team encountered several major barriers at the prototype stage. They had created totally new technologies for some of the high-speed mechanisms, including the shutter and mirror drive, but the performance of these technologies could not be assessed until they had actually been tried. The target performance parameters included sufficient durability for repeated operations, guaranteed performance at a sub-zero temperature, and reduced noise, vibration and bounce. An experimental design method was used to identify the optimal conditions for the air damper. Members of the prototype development team became completely engrossed in the project as they tirelessly conjured up new ideas for consideration. As time passed, the results began to appear increasingly optimistic. The prototype phase was extended, allowing the engineers to refine the new technologies through repeated experimentation.

Finally the prototype phase culminated in the summer of 1971, when Olympus engineers conducted low-temperature tests in a refrigerated storeroom rented from a local seafood wholesaler. They wanted to save the time that would otherwise have been required to transport the prototype to a thermostatic chamber in Hachioji in west Tokyo, so instead they collected data from the prototype using test equipment set up alongside frozen seafood. The process was a severe test for not only the prototype but also the engineer, because of the difference between the mid-summer temperatures outside and the severe cold temperatures in the freezing storeroom.

Olympus engineers encountered one technological barrier after another, but defeat was not in their vocabulary, and they would continue to meet each new challenge as long as there was even as much as another 1% probability for success. The new technologies that resulted from these efforts were turned into finished products at the Suwa Plant (present Nagano Olympus). The engineers were driven by their aspirations of achieving the "best technology in the world", and by their apprehensions that "Olympus might not survive if we don't succeed."

A Continuing Tradition of Manufacturing Excellence

The revolutionary M-1 (later dubbed the OM-1) went on sale in 1972. Its extremely compact design and superb portability made it a major hit. This started the trend toward compact SLRs. 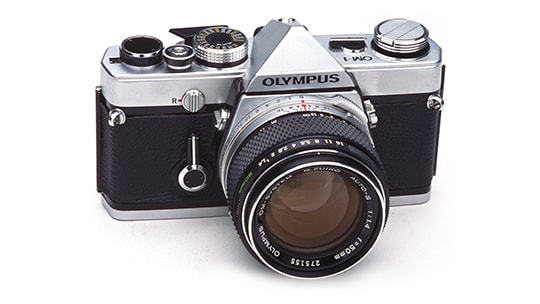 The OM-1 (1973)
The OM-1 was the world's smallest and lightest 35mm SLR at the time. Its development ushered in major advances in various Olympus technologies, including anti-rust, machining, and surface treatment technologies. 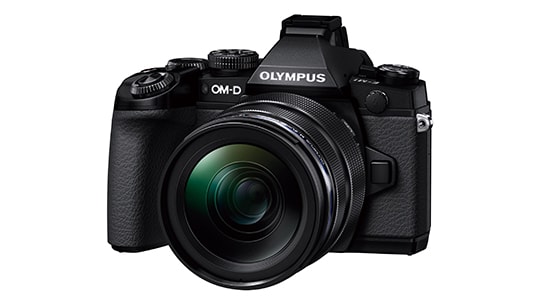 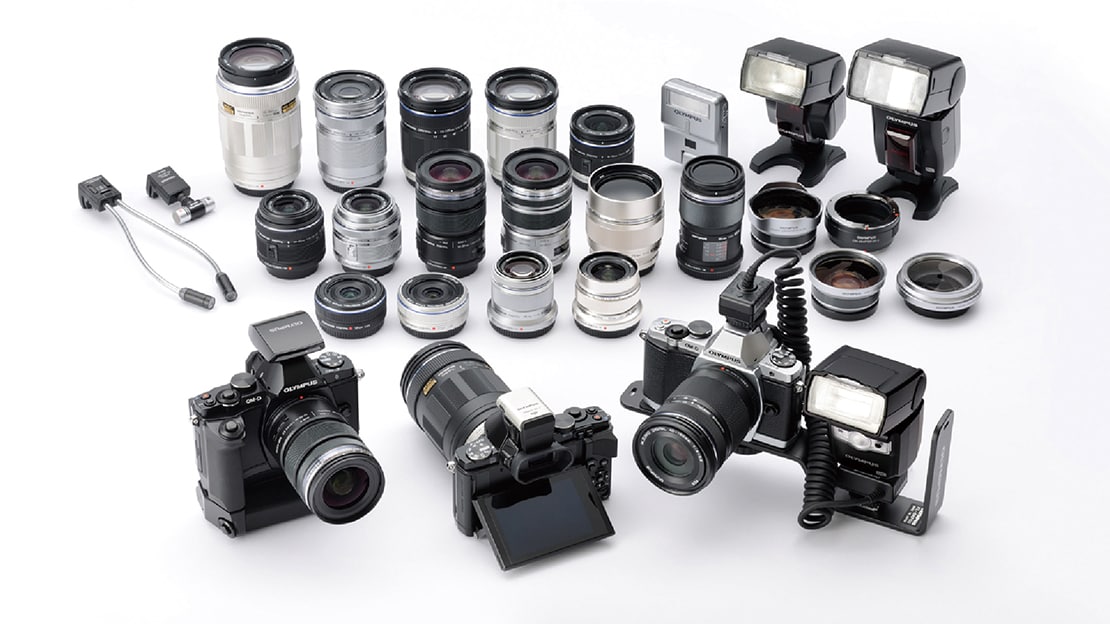