The founder of Olympus boldly declared that his company would one day make world-class microscopes. This was the beginning of a tradition of continually striving to create products that would be the first on the market and the best in the world. The qualities behind this corporate culture are the courage to take on any challenge, and an adamant refusal to accept failure.

What we can learn from the history of Olympus is that to meet the challenge of being first and foremost in technology and to maintain our position as one of the world's leading manufacturers, and that we must be objectively aware of our own strengths and always ready to strive toward new goals.

Olympus in the Postwar Era-Starting from Scratch Olympus was founded as a manufacturer of microscopes. The development of production infrastructure at the Ina Plant (present Nagano Olympus) began with the relocation of operations from Tokyo in 1944.

Due to war damage, there was not much equipment left to be transferred to Ina, and new tools would have to be prepared before production could begin. Olympus was literally starting from zero and had to overcome major difficulties before we were able to initiate production of the GK microscope, and later the UCE and DF microscopes. Olympus was desperate to succeed as a manufacturer, and our goal was to challenge German manufacturers' dominance in this field.

The heart of any microscope is its objective lens. For many years Olympus found it impossible to match the superior optical performance of German products. In the latter half of the 1960s, we began to develop processing methods for the fluorspar and alum materials used in the production of apochromatic objective lenses, and in the 1970s we introduced the AH, BH and CH series. In preparation for the development of the BH-2, Olympus established the Project Team, which was charged with the mission of improving objective lens performance. Development and production engineers toiled together to develop processing and performance evaluation methods based on theory and simulations, and finally they began to make significant progress. 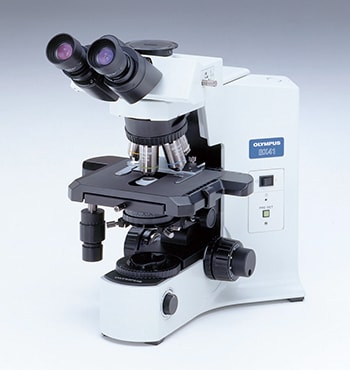 At the same time, there were also advances in microscopy, and Olympus was now aiming to create a high-quality product lineup spanning a range of specialized microscopy fields, including dark-field, phase-contrast, polarization, differential interference contrast, and fluorescent microscopy. Close collaboration between the R&D staff and production engineers brought sustained progress toward the establishment of technologies that could accommodate new advances in microscopy, including precision processing technology for lenses and crystal prisms, phase film vapor deposition, and optical multilayer film coating.

As the reward for our efforts, Olympus was able to reduce the lead of rival manufacturers of specialized microscopes while also improving our manufacturing technology.

Technological advances never cease. Competitors were developing infinity-corrected objective lenses, and Olympus also followed suit in this quest in 1988. There could be no compromise on performance or quality evaluation in this battle against time. Through the process of trial-and-error, Olympus eventually created over 100 new types of objective lenses and we succeeded in perfecting our UIS*Series.

The microscopes in which these new objective lenses were used were based on an innovative Y-shaped design. The founder of Olympus was motivated by his ambition to create world-class products. Over more than 70 years of relentless effort to meet the challenge of technology development, this ambition finally materialized in the form of products that would earn Olympus a place in the international hall of fame. A production manager commented at the time that this achievement resulted not from the efforts of one or two talented engineers, but from the combined synergy of teamwork. 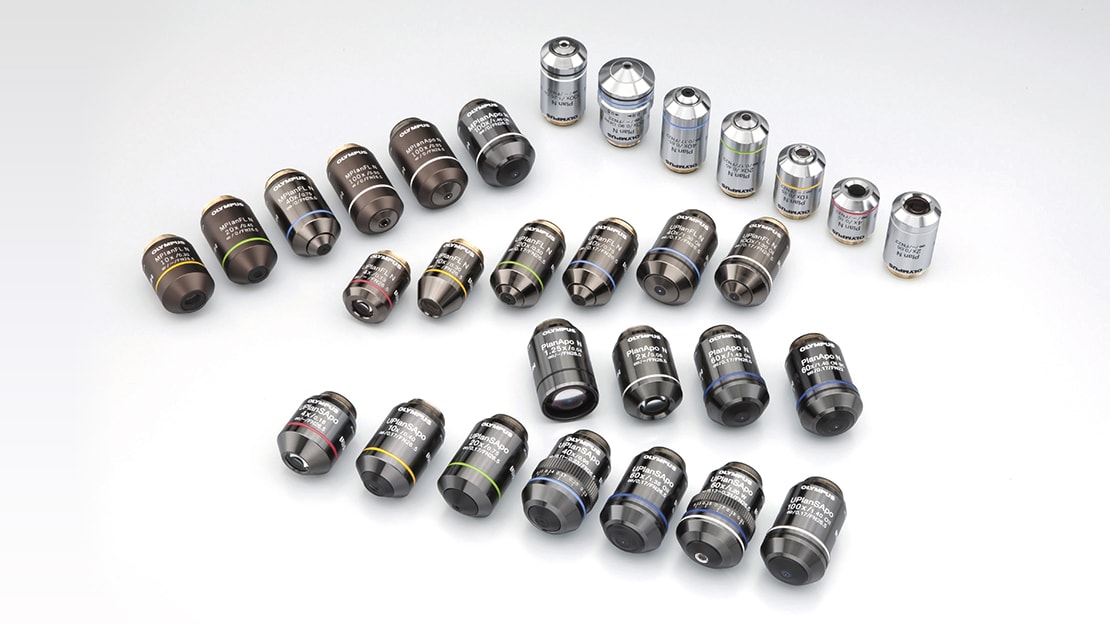 *UIS objective lens (infinity-corrected objective lens).
Objective lens designed for objects up to a distance of infinity. UIS is the Olympus nomenclature, and an abbreviation of "Universal Infinity System".

Olympus was in the process of shifting to low-volume production of a wide range of product series. This change was also reflected in the variety of units from which individual microscopes were assembled. To achieve the level of cost performance and efficiency required, Olympus needed to use machining centers capable of 24-hour operation.

Olympus also targeted improvements in our lens processing systems and we were aiming to introduce fully automated one-piece-at-a-time processing. The Olympus Automated Lens Processing System was established with the assistance of the Production Engineering Department and was subsequently refined as proprietary Olympus technology. The concept for this advanced processing system emerged as the product of the enthusiasm of one of our factory engineers, who took the initiative by organizing brainstorming sessions to bring together everyone's knowledge and ideas. By accepting the challenge of creating this new technology, Olympus had established a system that reduced costs while producing quality lenses without the need to rely on the instincts and skills of individual workers.

Don't be Complacent! To Maintain Our Status as Number One, We Must Always Have New Targets! 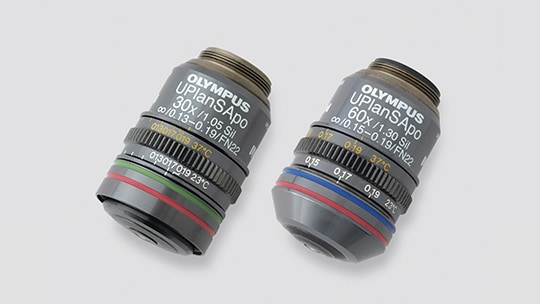 Oil-immersion objective lens
This contains 10 or so lenses polished to surface accuracy at the nano level. If the roof of the Tokyo Dome was a lens, then this would require a processing accuracy of no more than 1mm difference.

Olympus retained a firm grip on our determination to take the lead, and eventually we became number one in the world in terms of our share in the microscope market. Basking in this success, for a while, we almost lost sight of any new goal. Concerned that the Olympus culture of tackling new challenges head-on might fade away, our leadership began to search for the next target. They decided on the development and manufacture of a high-precision objective lens for use in a semiconductor inspection instrument as the new objective. All of the numerical evaluation data about the objective lens would have to be supplied to the user, and the level of precision required was beyond anything we had previously experienced. An additional hurdle was that Olympus did not have any experience in the assessment of product performance and skills through numerical data. Though a new challenge had been found, Olympus had neither the method for attaining that goal nor the systems to measure our achievement. A specialist team was formed to establish numerical assessment technology, and work began on the design, assembly and adjustment of the new objective lens. The system used to measure optical performance was based on a measurement method Olympus developed in-house. The performance of the objective lens and the system used to measure it were both unique.

This assessment technology not only provided us with an objective assessment of our processing and assembly capabilities, but it also showed us the way to new targets and the future of manufacturing. Today, Olympus continues to work toward new targets in engineering and manufacturing technology.