Find the Facts! Production Innovation Activities Move from the Desk to the Shop Floor

Until around the year 2005, Olympus' production innovation activities would only continue for about three or four years, and would not take hold. The reason for this was that improvement targets in planning documents were set at the desk, without taking a close look at the shop floor.

Olympus' production innovation activities used to only continue for three or four years. Although participants in internal corporate improvement technology training courses grew into the several hundreds, even after the trainees returned to each factory, not much progress was made in implementing improvements. The reason for this was that the improvement technology courses were mainly focused on teaching techniques to solve given problems, and did not foster personnel who could comprehend problem areas for themselves while driving improvements in their own workplace.

Instead of just training employees in the use of techniques, the manufacturing innovation center has played a central role in fostering "personnel who can find problems and drive improvements for themselves" as a companywide activity.

Olympus looked for a solution in the Toyota Production System. The company achieved a shared awareness of the fact that it need to learn from a system that had successfully increased profits through continuous improvements over a period of some 50 years. In 2005, consultants (trainers) were brought over directly from Toyota to start a project designed to foster personnel who could make continuous improvements (plant consultants).

In previous production innovation activities, targets were set first, and companywide plans were created in order to push measures aimed at these targets. These measures, however, which had been conceived of in the heads of people working at desks, ran into strong resistance on the shop floor, and the activities did not always produce the desired results.

The answer was to be found in seeing the entire shop floor in terms of its actual places, actual things, and actual facts.

The trainers hammered home the need to grasp the state of the manufacturing site in front of one's own eyes from the perspectives of actual places, actual things, and actual facts, and to take an approach that emphasizes the shop floor in order to bring it closer to the "way it should be" in terms of manufacturing.*

The candidates who participated in the plant consultant training project from factories around the entire company were confused at the start of the project. Unable to see the big picture in terms of the activities, they were completely unable to grasp the method of not setting targets in advance. The "familiar method" of determining targets in advance was negated, and the candidates grew impatient with how they felt as if they were instead being forced to make improvements in what was right in front of them.

The candidates earned the wrath of the trainers again and again by never going to the shop floor, by constantly rehashing desk-originated arguments, and by continuously attempting to set targets.

Previously set targets, such as "Reduce cost by 30%", were more like slogans. These targets were too vague, and tended to become policies along the lines of "simply reducing overall waste in the workplace". After ideas ran out, the improvements would simply grind to a halt.

Instead, it was necessary to closely examine the workplace, and thoroughly investigate which processes were the sources of discrepancies between reality and the way things should be, or the "problems". Based on this, the problems are narrowed down and the causes are thoroughly investigated. Whether or not the problem is, for instance, low workability or a reduced first run rate, this is determined from the actual facts. It is by examining the actual workplace that the concrete targets for improvement are made apparent.

Through a process of trial and error, the candidates gradually started going to the shop floor to grasp the actual facts for themselves, one after another. Measures were decided upon based on frank discussions that were held (sometimes all night long) with on-site leaders and workers in order to determine what the workplace should actually be like. After one or two years of this, as the lessons of the trainers started to sink in, there were no longer any candidates who thought in a desk-oriented manner as they had at the beginning of the project.

Candidates who had completed the training program returned to their posts at their original factories and put into practice the improvement methods they had learned. In addition, they were sent on business trips to other factories for several months at a time in order to instruct them on how to implement improvements based on actual places, things, and facts. After several years of travelling around between factories and perfecting their skills, the candidates were finally certified as plant consultants. The plant consultant system trains personnel by rotating them between the head office and factories, and leads the production innovation activities of the Olympus Group.

The shop floors of Olympus were affected by common problems at the time:

At the time in 2006, the first run rates at the Ina factory’s microscope assembly site were problematic. Confronting head-on the problem whereby the "leaders would not watch the shop floors", the on-site leaders and plant consultants placed at the Ina factory started out by spending one month continuously watching the workplace. As a result, they determined that the actual conditions were that "work standards were not clear" and "efforts to investigate the lower first run rates were weak".

It is not possible to determine whether work hours, work procedures, or anything else is correct or mistaken without setting standards. For this reason, work standards and points were clearly described in a work standard document. The method of teaching during work instruction was unified, and a "Technical Dojo" was set up to teach off the line. 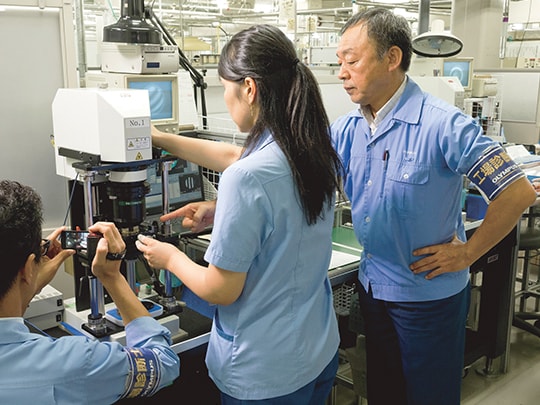 Plant consultants are central to the process of grasping problems based on the actual places, things, and facts.

Regarding the lowered first run rates, steady efforts were made in thoroughly investigating the causes of each individual case. When major problems were discovered, the brave decision was made to stop the line. By daring to stop the line, problems were made visible in order to approach the goal of "zero defects", which was the way the factory should be. A "helper system" was also introduced in order to enable rapid countermeasures. Whenever a problem would occur on the shop floor, a "helper" designated from among the skilled workers would come running and nip the problem in the bud right there.

These efforts rooted in actual places, things and facts were successful in recreating the microscope assembly workplace as one where the achievement of the targeted first run rate became something that went without saying. This is now a workplace that contributes a great deal to the business. 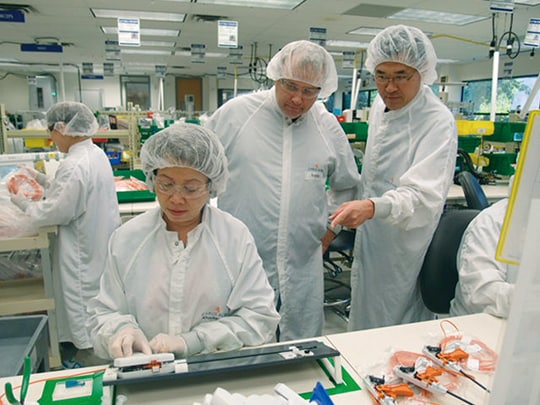 Production innovation activities run by plant consultants are being started in American factories as well.

Improvements based on actual places, things, and facts have become a shared global language. The development of human resources in order to continuously execute improvement activities is at the core of the Olympus production innovation activities.