Fluorescent observation is being used to conduct a great deal of basic cell research in areas such as gene therapy. In order to respond to the diverse needs of researchers for the ability to clearly observe cell samples under the microscope, it was necessary to improve the performance of fluorescence filters.

Olympus took on the challenge of manufacturing in-house the fluorescence filters that it had previously relied on other companies to produce, and with higher levels of performance as well, thereby establishing multilayer optical film technology that is at the top of its class worldwide. The multilayer optical film technology Olympus had cultivated in manufacturing microscopes was also applied to endoscopes and digital cameras, thereby supporting the realization of optical instruments that contribute to society.

Breaking Away from External Dependencies

An optical filter is a substrate made out of glass or some other substance that has been given the function of only allowing light of a specific wavelength to pass through. A wide range of different optical filters are used in various fields of research. There are many different manufacturing methods, and the method of coating a glass substrate with a multilayer film produces what is referred to as a "multilayer optical film filter".

Ever since it was founded, Olympus has been accumulating coating technologies through the manufacture of products such as antireflection coating for lenses. The company did not possess the multilayer optical film coating technology required for fluorescence filters, however, and used to be completely dependent on external sources. 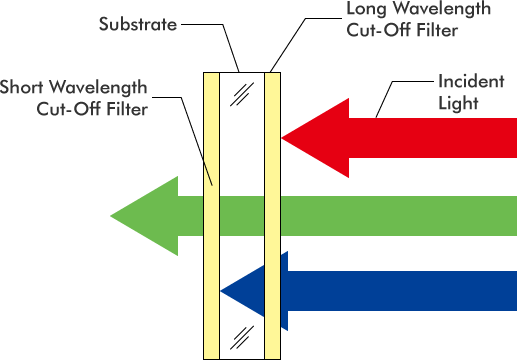 Multilayer Optical Film Filter (Example)
Wavelengths other than a specific wavelength are reflected or absorbed by the optical filter, and are not transmitted.

A method for using fluorescent proteins to observe live cells was established in the field of live cell research around the start of the 1990s. This method is used particularly often in gene therapy and other types of basic research, and since it enables the detailed analysis of gene actions, it has also resulted in a diversification of research techniques. The need of researchers for the ability to more clearly observe the fluorescence of cell samples has resulted in a strong demand for improved fluorescence filter performance.

In order to observe brighter images of living cells, it was necessary to create fluorescence filters using multilayer optical film with 100 or more layers that can sensitively pick up just the fluorescence.*1

Furthermore, in order to transfer the new technique to the factory and develop a production system as quickly as possible, engineers from the Ina factory (currently Nagano Olympus) were brought together at the Hachioji production technology department. Technology for manufacturing the new fluorescence filters was developed in this way by unifying production and factory technologies. 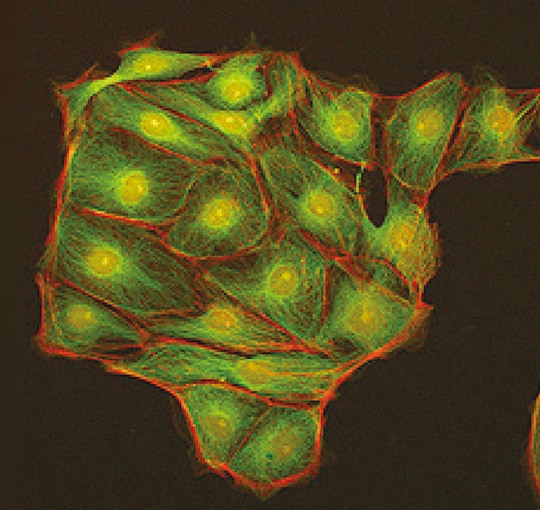 *1: Multilayer optical film fluorescence filter with 100 or more layers
Fluorescent observation is made brighter through the use of a film with an extremely high number of layers

Continuing to Respond to Various Needs through Daily Improvements

There was a wide range of factors to consider, including design techniques for the new fluorescence filter as well as conditions during manufacturing. The engineers ceaselessly repeated experiments whereby they would coat multilayer optical film, evaluate the results, and reflect the results in the next coating. For a fluorescence filter with over 100 layers, in order to elicit the performance called for by the design, it is necessary to accurately control the film thickness at the scale of several nanometers.

Also, since the coating process takes a long time, the system would have to be run continuously all day and night. For this reason, the engineers would have to stay next to the system while constantly monitoring the state of its operations. Even when the system operated without problems, the adherence of a small speck of dust could cause the coating to fail, wasting these round-the-clock efforts.

Through these steady efforts, the engineers investigated the causes of each problem and gradually accumulated manufacturing know-how. In order to speed up development, they also developed special equipment to evaluate film thickness during the coating of multilayer optical film.

After a great deal of difficult considerations, manufacturing technology was established that could produce the fluorescence filters necessary to clearly observe fluorescence images.

From Microscopes to Endoscopes and Digital Cameras

Live cell research has contributed to discoveries such as the method for preparing iPS cells that was awarded a Nobel Prize in Physiology or Medicine, and is accelerating the development of next-generation medical treatments. Multilayer optical film coating technology is also spreading horizontally to products other than microscopes.

Higher precision observational images are needed from medical endoscopes in order to enable the early detection and treatment of cancer. Multilayer optical film filters were developed that can isolate the light wavelengths that make it easier to see the blood vessels that lead to cancer, and this resulted in Narrow Band Imaging (NBI)*2 and Auto Fluorescence Imaging (AFI) both being realized in 2006. 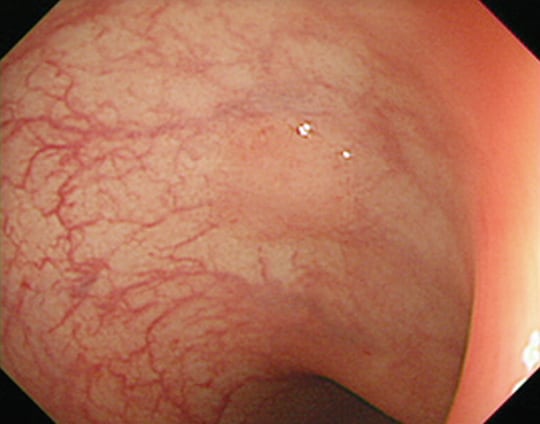 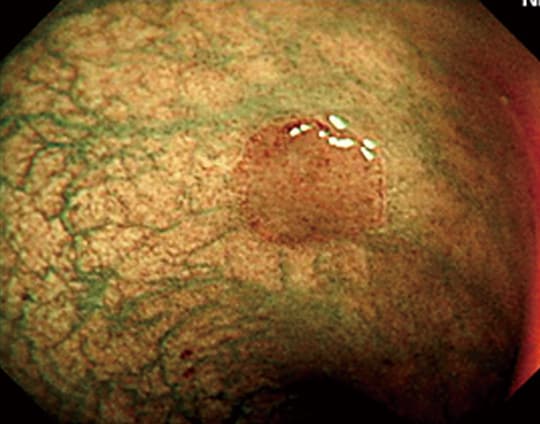 *2: Narrow Band Imaging (NBI)
By imaging the affected area using two colors in specific narrow bands of wavelengths, the fine structures of the capillaries and mucous membranes are emphasized.

The endoscope system using this Narrow Band Imaging was such a revolutionary product due to its contributions to improving the precision of early cancer diagnosis, it was awarded the Prime Minister's Award in the 2011 National Invention Awards.

Also, in the field of digital cameras, the ZERO (Zuiko Extra-low Reflection Optical) antireflection coating was developed that gives lenses a reflectivity that is half that of previous lenses.*3 This coating was used on interchangeable lenses released in 2011. The performance of this coating has been highly praised, and it has received awards including the Camera Journal Press Club Award in the 2012 Camera Grand Prix.

In order to continue leading the world in multilayer optical film technology, Olympus will continue making improvements while responding to each demand.