The Olympus Vision of Manufacturing, Turning Revolutionary Concepts into Reality

Our mission is to unequivocally differentiate ourselves by creating industry leading machines that are unique to Olympus. This commitment has resulted in the accelerated development of high-speed processing machines capable of performing one-piece processing of complex parts with zero setup.

This is a perfect example of an approach to manufacturing based on the steady accumulation of processing technologies, skills and know-how, and the application of these resources to the proposal and realization of revolutionary concepts. It also reflects a pattern of behavior that points to the future of metal working.

Endoscopes are made up of components that must be able to perform numerous functions in confined spaces. The shapes of these many components are extremely precise and complex. And many of these components need to withstand high exposure to chemicals, requiring them to be made from stainless steel, which is difficult to cut. In other words, the machining of metal endoscope components involves the creation of complex shapes using materials that are difficult to cut.

Blueprints alone cannot convey the complexity of the shapes of these components. Olympus metal machining technology has evolved in response to the challenge of machining these endoscope components.

In 1998, Olympus' Production Engineering Division (present Monozukuri Innovation Center) embarked on a project to review the various metal working processes and methods used in the past, and to debate future approaches to metal working. This project brought together staff specializing in a variety of different fields, including the development specialists of machining methods and equipment, electrical engineering, and IE engineering, and it provided a forum for wide-ranging discussions on the future of metal working machinery.

The concept that emerged from these discussions was the creation of a processing machine unlike any existing machine tool in the world. In somewhat oversimplified terms, materials would be fed into this machine at one end, and entire components would pop out of the other. Regardless of the complexity of their shapes, the components would be produced at a very high speed and with a high standard of precision. More specifically, the processing machine would be able to create complex three-dimensional shapes with tolerances measured in micrometers. It would be able to produce these parts at high speed and would require zero setup time, and dimensional corrections could be made within the machine. And of course, it would also be capable of single-chuck 5-axis and backside machining of complex shapes. 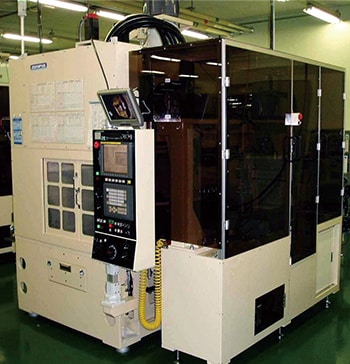 The revolutionary multi-processing system, developed by Olympus-capable of performing one-piece processing of intricately shaped components at high speed and with zero set-up time.

All of the machine tool manufacturers we contacted at the time responded that such a machine was a pipe dream. This merely reinforced our determination to become number one in the world by turning our concept into reality.

We began by defining the specifications. An international machine tool fair held that year provided an opportunity to gather information from the industry so that we could gain a thorough understanding of the state of the art for each of the elemental technologies involved. The targets we had set far surpassed all existing technology.

Our first multi-processing machine swept into action in 1999. It was designed to produce an endoscope tip component called a C-body in a single process and with zero set-up time. This system was also a prototype for a micro-factory to be displayed at the Olympus Technology Fair. The machine had a significant impact on numerous representatives of machine tool manufacturers who saw it. It was also displayed at a conference, to the astonishment of machine tool manufacturers. Shock waves rippled throughout the entire machine tool industry as the word spread that a company outside of their industry had created such a sophisticated system.

However, there were still glitches. Though the concept was revolutionary, we had focused on the development of a compact system and there were too many rigidity problems. Though we assessed it for use in machining at Aizu Olympus, we found that the machine would not be able to sustain the required level of precision. Even so, we remained firmly convinced that the machine would eventually realize its potential.

"Dream Machine" the Product of a Stubborn determination for Manufacturing Excellence

With high-precision technology for assembling fine components, such as endoscopes and endotherapy devices, etc., the engineers at the Olympus endoscope manufacturing facility, Aizu Olympus, strive to become one of the world's best in speed, precision and accuracy. They were certainly not the kind of people to abandon their quest because of the problems affecting their first prototype machine suggested by the Production Engineering Division. They have made up their minds that they were going to create a working Dream Machine. Their strong will to build a firm position in industry by differentiating also in manufacturing-ability was cultivated through the course of action. 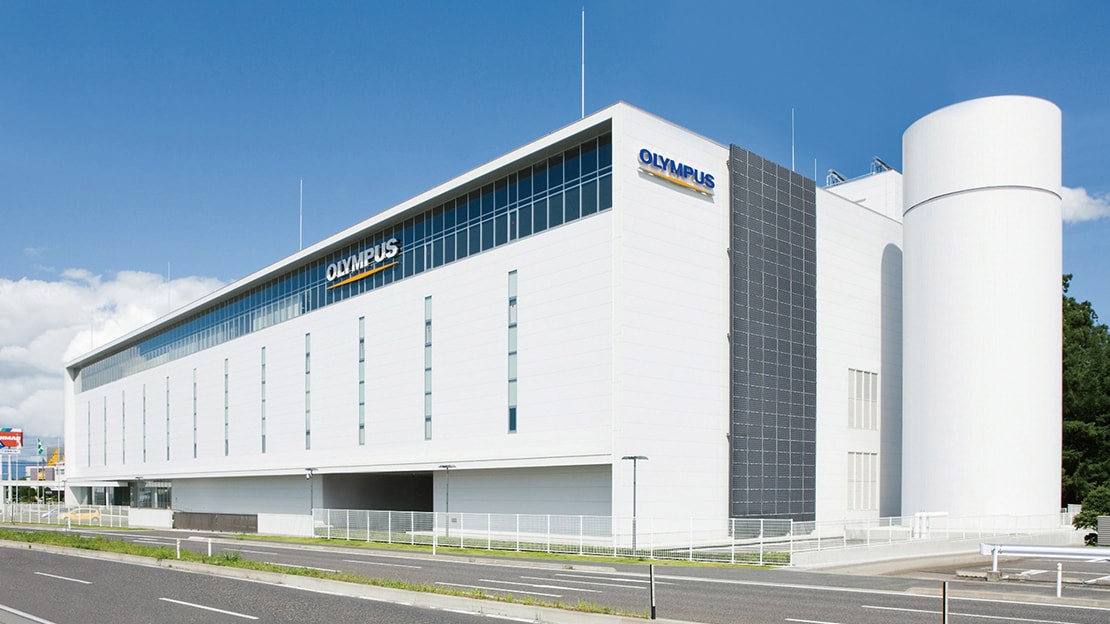 After identifying the problems with the prototype machine, we began designing the successor in collaboration with machine design engineers. The concept remained unchanged. The Medical Technology and Development Department joined in the development work. The tool changing speed of the second machine exceeded the target that we had set for the original prototype. We also enhanced the machine's control software and the information systems used to process the CAM and cutting tool data for one-piece processing. In designing the second machine, we did not limit ourselves to just solving the rigidity problems that affected the original prototype by increasing rigidity, we fundamentally improved the precision of every component in the processing machine that had any influence on machining precision. Members of the start-up team worked relentlessly to optimize the machine's precision. Some even picked up grindstones used to finish flat surfaces and used them to add finishing touches to cast components, their faces wet with perspiration. The prototype was based on a revolutionary concept. We succeeded by combining the ideas embodied in that machine with processing technology, skills and knowledge accumulated over many years.

Today Aizu Olympus is equipped with many of these multi-processing machines, which can turn out intricately shaped endoscope components.

This is part of the tip of an endoscope. These components are turned out in a single start-to-finish process, and require no set-up time.

The persons concerned who visit the factory invariably stop in front of these machines, and many comment that these machines represent the paragon in manufacturing machinery.

Olympus has given live to the same approach in our lens processing machines. The result is the Olympus Lens Processing System (OLS), which automatically processes lenses from start to finish.

We will not allow our success with the multi-processing system to make us complacent. Our pursuit to develop the next-generation "dream machine" is never-ending.