The constant challenge of replacing skill with technology accelerates the evolution and differentiation of technology.

The lens grinding process used to rely upon the manual labor of skilled workers.
Due to the requirements of both the changing times and businesses, it became evident that simply relying on skill alone would not be sufficient to achieve QCD targets (Quality, Cost, and Delivery). This is why Olympus worked to develop an innovative automatic lens processing system before any other company, thereby enabling the mass production of high-precision lenses.

This development involves new challenges related to converting what was previously the sanctuary of highly skilled craftsmen into technology. These challenges continue, involving grindstone development and quantification of work that previously relied on instinct and technique. The evolution of lens processing technology continues in this manner.

Considerations Regarding the Automation of Lens Processing

Optics is a core technology for Olympus, and the lenses that comprise optical systems are important parts that determine a product's performance. For a long time, lenses were still being processed based on the same ancient principles as during Newton's times, relying upon the knowledge and techniques of skilled workers.

In the second half of the 1970s, however, there was a sudden spike in the demand for mass production, stable quality, and lower costs that made the automation of lens processing earnestly desirable. Although automated lens processing machines were available at the time, none of them satisfied Olympus' requirements for precision or lens shape.

This was when Olympus took on the challenge of automating lens processing with the goal of leading the industry. To facilitate automation, it was imperative to replace the following two skills that had previously depended on the ability of the technician with technology:

Polishing in particular requires a great deal of skill, and involves polishing the lens on a polishing plate while applying liquid abrasives. This processing phase can take upwards of an hour in some cases. The technician designs the polishing plate based on the lens being processed, and the accuracy of this task directly impacts the precision of the lens surface.

Olympus then switched its focus from liquid abrasives to the development of a unique grindstone that is been hardened with bonding. Such a grindstone enables a certain level of polishing plates to be constantly produced in dedicated machines without relying on the skill of the operator. This also greatly reduces the processing time by increasing grinding efficiency. 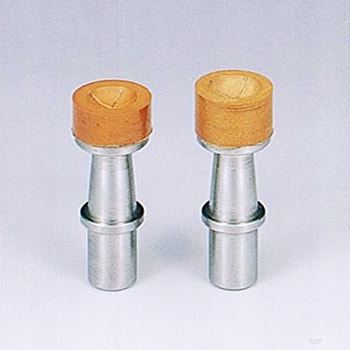 During this grindstone development, Olympus tirelessly experimented with a large number of methods for compounding abrasives and bonding agents, crushing methods, and other methods in order to arrive at the optimal solutions. During these processing experiments, Olympus also paid attention to the opinions of skilled workers, and finally perfected grindstones that could be applied to production after improving both processing performance and durability.

When this new system was first put into practical use, the product developers adopted glass materials that are easy to process using the new grindstones, thereby expanding the range of product application. The processing performance of the new grindstones even surpassed that of specialized grinding tool manufacturers.

Since the lens being processed could not be maintained at a set orientation during grinding, this would cause the processing load and polishing plate operation conditions to be unstable. The technician would verify the state of the lens during the process and adjust the finish based on instinct and technique. In order to "quantify" these conditions, it was necessary to retool the gripping device used to hold the lens being processed in a specific orientation.

The production engineers observed the gripping devices at the workplace, discussed the issue with technicians, and conducted a meticulous survey of existing technology. As a result, focus turned to the coupling mechanisms used for automobiles. Careful experiments were repeated involving the manual construction of countless model mechanisms, until the mechanisms performed exactly as envisioned.

The gripping device developed in this way was called a "link". Throughout repeated processing experiments, the opinions of the technicians were incorporated in order to continuously improve the device until it was ready for practical application. By combining the link with the grindstone, it was possible to achieve the demanded level of quality, and Olympus succeeded in quantifying processing conditions. The link was then repeatedly improved as a unique Olympus technology that has now become the standard of lens gripping devices. 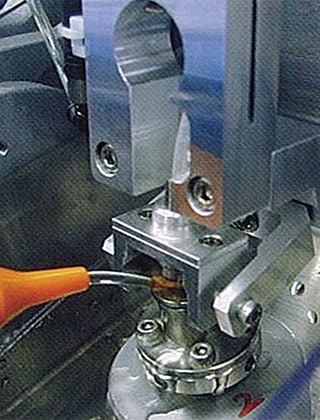 The use of grindstones and links made it possible to replace skill with technology. The next phase was the completion of an automatic processing system. To achieve this, first it was necessary to input the optimal lens processing parameters, which are in turn invoked to reproduce the precision processing conditions.

Next, the three phases of lens processing were linked in an automatic transport system. The designers of this system paid extremely close attention to the opinions of the technicians while focusing on ease of use, and were also successful in streamlining the initial setup work.

The first automatic lens processing system was installed in 1984. Ever since this time, the system continued to evolve as it was introduced to the production of lenses for microscopes, cameras, and endoscopes, eventually culminating in the reveal of an automatic lens processing system for cameras at the "Olympus Technology Fair 75" in 1994. Engineers from other companies saw this and were surprised at how Olympus was able to make every part of the system in-house, from the grindstones to the devices themselves. At the time, most large optical manufacturers used commercially available systems.

No End to the Challenges in Lens Processing Technology

Olympus has steadily improved its automatic lens processing systems. At the same time, optical instruments have also evolved on a daily basis, and the demands placed on lenses in terms of both precision and cost continue to increase as well.

In order to respond to these demands, production engineers are continuing their efforts to replace higher and higher levels of skill with technology, and technicians are rising to the challenge of achieving even higher skill levels that cannot yet be automated. As both production engineers and technicians improve each other by engaging in friendly competition, the evolution of lens processing technology through the mastery of new challenges never ends. 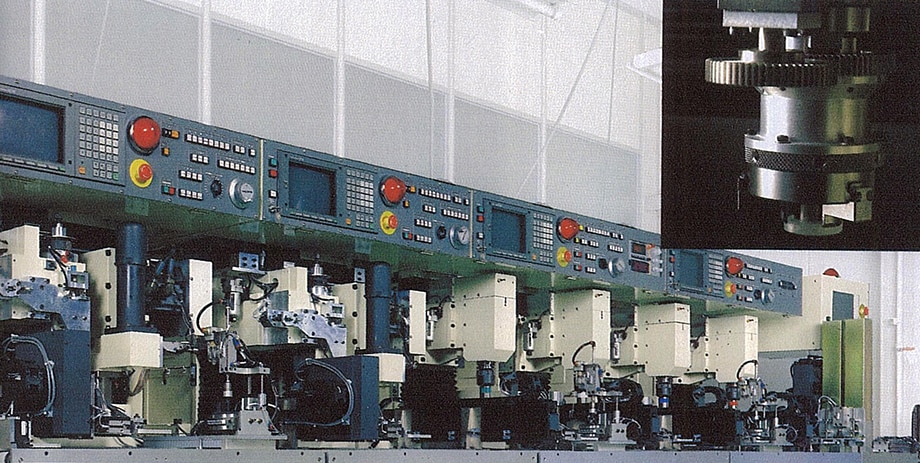